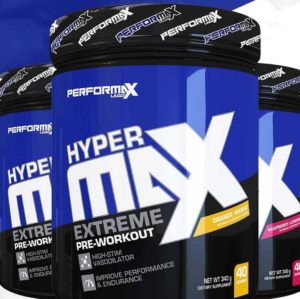 The company that takes things to the max is now taking it to the Extreme with HyperMax Extreme!

The HyperMax pre workout series has been through a couple revisions over the years, starting with HyperMax XT and then changing to just “HyperMax” in late 2017, which should remain on the market. But that was nothing like what we have here!

After a solid round of beta testing, we can attest that Performax Labs now has their most aggressive and well-dosed pre workout supplement yet. This is the brand who takes things to the max, and they’ve done just that in all the right areas — yet none of the ‘wrong’ ones — with this formula, which comes in the “20/40 2-scoop/1-scoop split”.

The quick HyperMax Extreme notes (in the two-scoop serving):

The launch is at NaturalBodyInc in New York, and my beta test review and ingredient discussion are below, but first you can check out PricePlow’s prices and sign up for Performax Labs news and deal alerts since the brand slowly and steadily puts out rock star supplements:

We did a Beta Test (video down below) but you know that we need production tubs for an official review. This one passed with flying colors, and the Orange Mango flavor is the one for sweet tooth lovers:

The taste! This is definitely Performax Labs’ best flavor system job – consider it nearly all raspberry over “Raspberry Lemonade”, which I loved (not a citrus guy). With all the stimulants they use, this is no simple feat and they’ve been getting better and better with it.

However, in the review above, Orange Mango beat even our impressions of raspberry lemonade!! Two great choices depending on if you want it aggressively sweet or more mild.

As mentioned in the intro, this is a 2-scoop serving with 20 full servings per container. Each scoop weighs 8.5g, so you have a 17g serving size. Due to the stimulant dosage, many will land at 1.5 scoops, but that’s up to how extreme you want to take things: 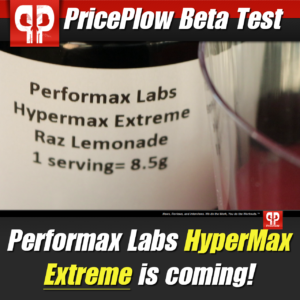 Mike got a sneak peak here, and fell in love with the strong raspberry side of this one!

As mentioned in the intro and review, Performax Labs is starting HyperMax Extreme off with Raspberry Lemonade and Orange Mango, two flavors they’re well known for in their latest few releases.

The raspberry lemonade flavor is very heavy on the raspberry side of things, which we personally liked a lot. But in the official review above, it was Orange Mango that had the wow factor!

Before knowing all of the ingredients, I was honored to be able to participate in Performax Labs’ beta test, and came away with some intense workouts. But the thing I noticed most was the euphoria coming from Hypermax Extreme:

The PEA blend acts in well under 10 minutes, and I was hit with a wave of quality mood and energy support that got me fired up to train on a low-sleep day. The pumps are exactly what you’d expect from this label – fantastic – but it’s the mood and energy burst that I kept coming back for — consistent with Performax Labs’ other supplements, by the way.

You seriously think you need to stack something here?! If anything, you could add some CreMax for the creatine support… but outside of that, you’re looking really good. A good combination to add could be choline and carnitine, but you should be eating plenty of red meat and eggs, and if you are, then you don’t need to worry about those as much.

We honestly don’t think you need much more in the way of pumps either. But if you’re nuts, you can always go with VasoMax, which actually provides plenty of GlycerPump glycerol (not in HyperMax Extreme) as well as choline from Alpha-GPC, also not in here.

What an aggressive pre workout supplement. As always, Performax Labs takes things to the max, and basically goes as hard as you can go without using DM*A ingredients.

We are huge fans of StimMax, which puts us at “perfect cruising altitude”, and HyperMax Extreme takes much of the intense stimulation from that and adds a whole truckload of pumps, endurance boosters, and ergogenics. What more could you ask for?

The biggest question is where you’ll land dosage-wise. We ended up at 1.5, but if you can rock out two whole scoops, you’re going to be training on another planet, with strength gains from even the caffeine, let alone everything else like a ridiculous citrulline dose or VASO-6.

Performax Labs lives up to their name, and executed extremely well on an “Extreme”-themed supplement. Are you extreme enough to handle it?