How can we crush more carbs? Hard working MFer Seth Feroce has the answer!

Axe & Sledge makes supplements for the hardest workers in the gym.

In order to build a respectable physique, your training, sleep, recovery, supplementation, water intake, and most importantly nutrition needs to be on point. To maximize muscle growth, you should be high protein and in a slight caloric surplus, meaning you’re consuming anywhere from 250-300 calories above the amount of calories it takes to maintain your body weight.

It would be great if you could eat everything in sight and every ounce of weight gain that showed up on the scale was lean muscle mass… unfortunately that’s just not reality. Being in it for the long haul and taking a more slow approach is one way to minimize fat gain, but there are also some great supplements you can add in to help as well!

Axe & Sledge GDA+: Have Your Cake and Eat It Too!

Glucose disposal agents (GDAs) are a relatively hot topic in the sports supplement industry, and are gaining a lot more popularity since huge brands are coming out with incredible formulas.

In case you’re not familiar with glucose disposal agents, they are dietary supplements that help control insulin release and shuttle nutrients, such as carbohydrates, into the muscle opposed to fat. GDAs aren’t only useful on a bulk, they can also be used while trying to lose weight, to offset the damage of a cheat meal, and to similarly optimize nutrient partitioning. 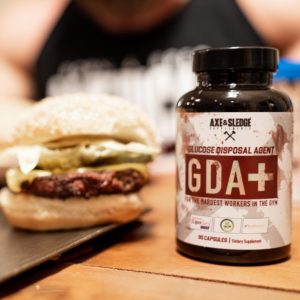 GDA+ will ensure that burger goes straight to the muscle and not fat!

However, when you’re purposely consuming an excessive amount of calories in hopes of putting on lean muscle opposed to fat, a GDA can help you reach that goal. There are several GDAs on the market, but one that really stands out is GDA+ from the hardworking MFers’ at Axe & Sledge. And let’s face, we all know that Seth Feroce enjoys his fair share of snacks and cheat meals once in a while. But he still wants to look and perform at an elite level, which is why GDA+ is his secret weapon!

They’re all about formulating the highest quality supplements by using patented ingredients, transparent labels, and efficacious dosages. We’ve written several blog posts about some of their best selling products, such as Hydraulic, The Grind, Seventh Gear, Demo Day, and Home Made. Believe us, Axe & Sledge has what it takes to beat out some of the top dogs in the industry, and GDA+ is just another example of that.

If you want to learn all about GDA+, keep reading! But first, don’t forget to sign up for Axe & Sledge news and deal alerts to get epic sales, product launch dates, reviews, and giveaways sent straight to your email! Axe & Sledge has some big things coming, we know you won’t want to miss! 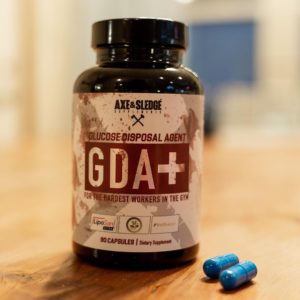 Whether you’re trying to lose weight, gain muscle, or not get too fat after a cheat meal, GDA+ is for you!

When Axe & Sledge does something they go all out, so of course GDA+ is loaded with nine ingredients designed to optimize nutrient delivery to the muscles instead of fat!

Patrick Williams, the main formulator and co-founder of Axe & Sledge, is always a huge proponent of using patented or trademarked ingredients in nearly every product they come out with.

It just shows that Axe & Sledge is dedicated to producing a supplement unmatched quality, safety, and potency for their hard working customers. Therefore, you’ll find several tested and verified ingredients on GDA+ supplement facts panel, such as LipoSan Ultra Chitosan, GS4 Plus, DigeSEB, and Bioperine.

Furthermore, GDA+ has several complexes to assist your digestive system in processing large quantities of food, including a Fat Blocking and Carbohydrate Blocking Complex, along with digestive enzymes! We told you this product is fully loaded and the supplement facts panel says it all.

GDA+: How to take it

You may be wondering what’s the best way to take GDA+ for optimal results, well here’s what Axe & Sledge recommends!

Our ingredient analysis down below is based on the recommended serving size of two capsules, however that may not be enough depending on how much fat and carbohydrates you’re consuming at a given meal. 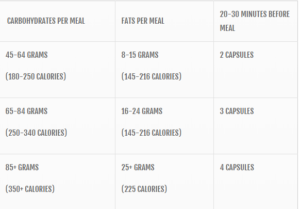 In order to get the most out of GDA+, Axe & Sledge suggests:

It makes sense to up the dosage based on how much carbs and fats you’re consuming at one meal. The more you eat, the more help your body needs to process all the food!

Now, let’s dive into what these ingredients are capable of! Here’s what one serving (two capsules) of GDA+ delivers:

Axe & Sledge continues to impress and GDA+ is another epic product! GDA+ can be used in a wide variety of ways, whether you’re overweight looking to improve insulin sensitivity and lose a few pounds, are getting ready for a big cheat meal with your friends, or trying to bulk up while keeping fat gain at bay. If you can’t tell by the formula, GDA+ is going to deliver the results you’re after. 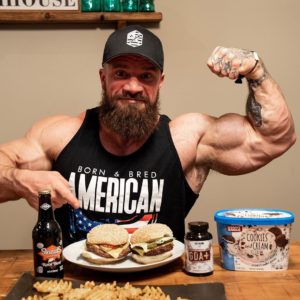 What can we say, Seth goes big when he has a cheat meal! Luckily he has GDA+ to use for damage control.

If you follow along with Seth Feroce or Dean Perrone on social media, it’s obvious that they enjoy a few cheat meals every once in a while, but somehow they still maintain a lean, muscular physique. Well… we may have just discovered their secret weapon and it’s GDA+. Of course they both train hard and follow a solid nutrition protocol the majority of the time, but they still like to live a little, and that’s where GDA+ comes in extremely handy for them.

Axe & Sledge’s goal with GDA+ was to help shuttle nutrients into the muscle, but keep them away from getting stored as fat. This allows you to be ready to train the next day and not feel weighed down from a higher calorie meal. If you’re looking to optimize nutrient delivery and still enjoy a bit more processed food here and there, then pick up a bottle of GDA+.

One more thing! Don’t forget to subscribe down below to get notified when deals, new products, flavors, reviews, and interviews go live from the hardest working company in the supplement industry, Axe & Sledge!