One of the hottest brands on the market right now, Primeval Labs, has been on a major tear. They’ve always been known for their popular intra workout / EAA supplement, EAA Max and IsoLit whey protein isolate, but recently took things to a new level with a best-in-class ready-to-drink pre-workout, Ape Sh*t Untamed RTD.

But what if you need some carbs with that Ape Sh*t pre workout? EAA Max is great, but it only has 2.5g carbohydrates, not nearly enough for anyone getting after it hard and trying to load up their muscles with glycogen. 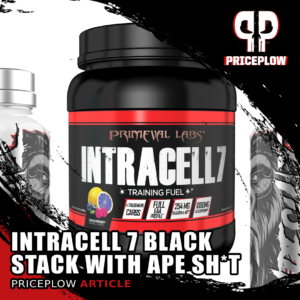 The answer is that you stack with Intracell 7 Black. This is an intra-workout supplement that took an older formula named Intracell 7 and added an extra edge to it. This has long been an underrated supplement at PricePlow Nation, since we love jamming our carbs around workouts and using them as performance enhancers, which is exactly what this supplement was made to do.

Intracell 7 Black is a carb-based EAA supplement from Primeval Labs that brings:

Before we get into this new label, be sure to sign up for PricePlow’s coupon-based deals, and don’t forget to sign up for our alerts so you don’t miss anything that Primeval is doing: 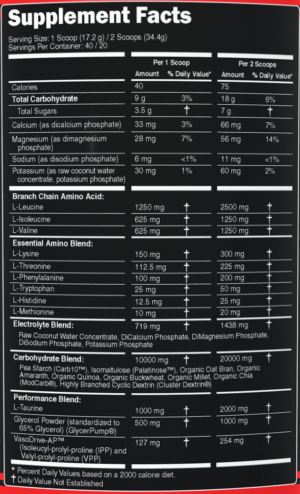 This here is the definition of “performance enhancement”!

Note: Doses listed below are based on one full serving (i.e. two scoops). Intracell 7 Black is a 40/20 serving product meaning that a full serving is technically two scoops.

Below is a list of the flavors scooped up by the PricePlow system:

Primeval Labs is non-stop lately, so sign up for our Primeval news alerts!

The original Intracell 7 was a revolutionary product in its time, and then Primeval went ahead and improved that for the new addition, bringing pump ingredients, carbs, and EAA’s. They went and did it again, upgrading their formula for the latest iteration in their Black series. Primeval has been consistently putting out solid products, making them one of our favorite companies out there.

And given that this has carbohydrates, and Primeval has some of the best flavors ever (their Rainbow Sherbet flavor system is basically unbeatable for those of you with a sweet-tooth), we these flavors are as good as expected. But that comes secondary to the performance you should get from the carbs, aminos, hydration, and pump agents inside!

So after you’ve had your Ape Sh*t, this is how you sustain the ape.