Here we go, primates! If you thought Primeval Labs was done with their insane Ape Sh*t series of supplements, then think again. Today, they’re taking things to the MAX.

The brand that brought you EAA Max isn’t done maxing out just yet – they’ve got a stimulant-free nitric oxide booster for you to take solo or stack with any of their other stim-based pre-workouts linked above: 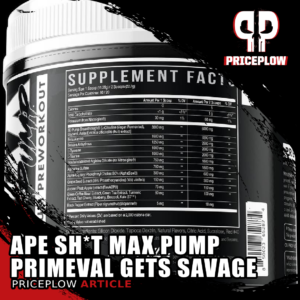 Primeval Labs Ape Sh*t MAX PUMP is what it says it is – an extreme pump supplement with two patented pump supplements, led by a clinically-tested 1.5 gram dose of Nutrition21’s Nitrosigine, paired with the new 3D Pump Breakthrough.

It’s not just about Nitrosigine’s epic nitric oxide production, though — inside, we also have the cell volumization and hydration trifecta from glycerol, betaine, and taurine — three ingredients we love to see together.

That’s not all, though – there’s some focus boosters in here as well, including large doses of tyrosine and alpha-GPC. It was released alongside the stim-based Primeval Labs Ape Sh*t MAX, which you can stack in to get the energy level you desire!

Get ready for a stim-free pump supplement that has the entire fitness world on watch. But first, let’s check availability and our Primeval Labs news alerts, because if there’s Ape Sh*t MAX PUMP here… you can rest assured that there may be an Ape Sh*t MAX coming too:

Ape Shit MAX PUMP can be taken in single scoop doses, but is designed to be double-scooped if you really want to get after it and are chasing clinical doses. For most people, the choice of dose will depend on the stack – if you’re already taking a pre-workout, you may only need one scoop… but if you’re using this solo, two scoops is likely the way to go – especially to get that clinical 1.5 grams of Nitrosigine we love!

In a 2 scoop serving of Ape Sh*t MAX PUMP, you get the following:

For those of you who don’t know, Primeval Labs are known as the flavor kings. They’re one of the first companies to make EAAs taste delicious with EAA Max, and with no stimulants to deal with, we’re nearly certain Ape Sh*t MAX Pump will be top-notch as well:

Conclusion: The Ape Sh*t series steps it up even further

We were already excited about the entire line of Ape Sh*t supplements from Primeval Labs — let’s go over the entire pre-workout platform: 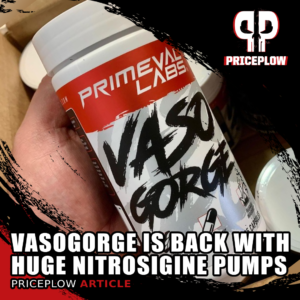 Nitrogisine, the lynchpin ingredient of VasoGorge, is one of our favorite NO boosters. If you don’t want to do two scoops of Ape Sh*t MAX Pump, you can sub in a touch of VasoGorge too

Additionally, VasoGorge is a capsule-based method to get Nitrosigine in, so you have many ways to boost pumps — and no excuses not to! Finally, this can all be stacked with Ape Sh*t Test, which is the (currently) only non-pre-workout in the series.

If you couldn’t tell, Primeval Labs is serious about this line, and we’re not sure if they’ll ever be done supporting your apesh*t tendencies in the gym. Biggest question is what stack combination you’ll use to achieve total alpha ape supremacy!