AstroFlav is one of our favorite brands because they really go the extra mile for their customers. This company was founded by supplement-industry veterans with tons of direct retail customer experience. That’s a big part of the reason AstroFlav really knows what they’re doing and what consumers want.

Plus, they have ASTROnomically great FLAVors!

Beyond great flavoring, AstroFlav’s doing some really unique stuff lately. The MetaBurn PM hybrid fat-burning sleep aid had some incredible tricks up its sleeve, and today’s new pre-workout supplement from AstroFlav is no different:

AstroFlav One Scoop Only Pre-Workout – and they mean it 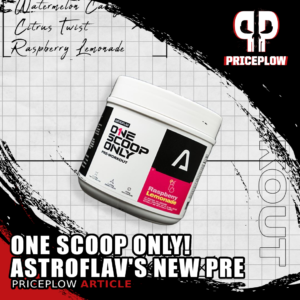 One Scoop Only! It’s AstroFlav’s epic new pre-workout supplement — the first to use NucleoPrime Nucleotides!

Lately, supplement consumers have been grumbling about a trend in the industry regarding half-dosed products, particularly pre-workouts. These are products that are marketed and sold as if a single scoop were enough to give users the benefits we’re looking for. In many cases, even supplement facts labels are written as if a single scoop of the product is all you need.

In reality, many of these products require two scoops to get efficacious doses — especially in regards to certain ingredients. Sometimes manufacturers give you the “option” of double-scooping a product. But, in reality, it’s basically obligatory.

That’s not the case here:

AstroFlav caught onto this, which is why they’re launching One Scoop Only (often abbreviated “OSO”). Everything in this formula is dosed appropriately for a single-scoop serving to give you everything you need, and more.

Charged with 375 milligrams of caffeine, OSO gives us our first chance to cover a supplement with NNB Nutrition’s NucleoPrime nucleotides, which we’re very excited to see in a pre-workout! Combined with D-ribose, we have a very powerful and out-of-the-box method of supporting the mitochondria with enhanced, feel-good ATP production.

Let’s get into how it works, but first, check the PricePlow news and deals:

One Scoop Only Ingredients

In a single – you guessed it – 1-scoop serving of One Scoop Only from AstroFlav, you get the following, starting with the Tru-Absorb Electrolyte & Pump Complex: 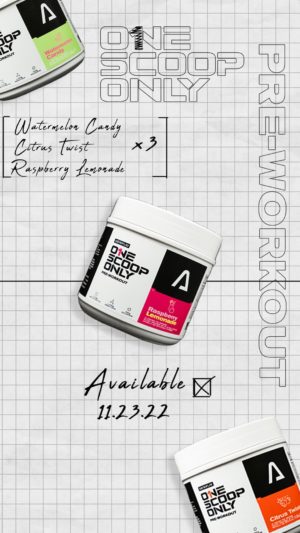 The whole two-scoop trend can be annoying for obvious reasons – first, many of these products are sold in packages that contain 40 single-scoop doses. Now, 40 doses is definitely enough to satisfy most customers, but if you actually have to double scoop it, you only get 20 doses. That means if you’re taking the product daily, you run out in less than a month.

Granted, some people don’t care. But it seems that most consumers don’t enjoy having to replace products every few weeks and pay more for extra containers. At worst, the obligatory double scoop could be taken as a deceptive marketing practice.

Besides the one scoop only selling point, this formula is really awesome. We’re glad to see ingredients like D-ribose and NucleoPrime make an appearance, as supplement formulators catch on to the possibility of attacking ATP production from previously unexplored angles.