UPDATE: DVST8 WorldWideWide has been discontinued, but replaced by an even better version in DVST8 Global!

Since 2014, Inspired has been coming out with some of the most innovative products on the market to ‘fuel what inspire’s you’.

Since 2014, Inspired Nutraceuticals has been formulating some of the most innovative products on the market. They have gained fans from all around the world, but there is one issue…some countries have strict regulations on ingredients, and as a result, don’t allow certain products to be sold. So most of the world has been missing out on everything Inspired has to offer.

Inspired to the Worldwide rescue!!

It’s obvious there was a major gap in the supplement industry and a need for a killer pre workout to be available for everyone. This gap was filled by one of the best and most savvy CEOs in the industry, Chris Waldrum of Inspired. He quickly made the decision that it was time to make a change and give back to all his loyal supporters worldwide. After making a few tweaks to his infamous pre-workout, DVST8, he was able to create a globally-compliant formula without compromising on efficacious dosing, patented ingredients, or the amazing flavors we expect from Inspired. The launch of DVST8 WorldWideWideWide gave consumers from all over the world the ability to experience what a fully loaded pre workout can do for them! 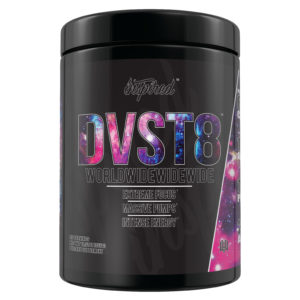 DVST8 worldwide is here to give Inpired’s fans around the globe a taste of what a fully loaded pre workout can do!

DVST8 Worldwide: Everything you need, nothing you don’t!

Before we provide you with a full explanation of every ingredient included in DVST8 Worldwide, take a second to sign up for PricePlow deal alerts and Inspired news, so you never have to pay full retail price again or miss out on the launch of more products to come!

DVST8 Worldwide includes 25 full servings, no half-scoops here! This formula is here to deliver everything you want in a pre workout, greater endurance, intense focus, and extreme pump. The fully-disclosed supplement facts panel is broken down into two sections, The Truth Matrix and That Prestige Worldwide Energy. This is how we will organize our analysis below so you fully understand why each ingredient was carefully included.

Here’s what a full scoop (14.2g) of DVST8 Worldwide provides:

Below you can find an updated list of DVST8 Worldwide’s flavors:

Chris Waldrum and the team at Inspired were able to do something most companies can’t: mask the flavor of some unpleasant tasting ingredients! If you’re more of a sour candy lover, Sour Yummies is the way to go! However for something sweet Malibu Breeze is hard to beat. Don’t worry about choosing a flavor because you can’t go wrong with any of them, Inspired never disappoints!

DVST8 Worldwide: a pre workout available for everyone! 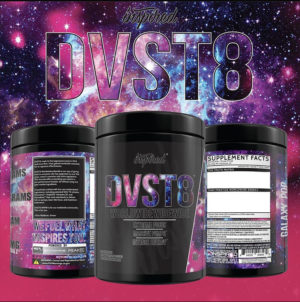 This formula will give you the power to transcend to a different galaxy.

Inspired Nutraceuticals loves taking on challenges and completely crushing them! Creating a pre workout with a solid formula, patented ingredients, that’s globally compliant is no easy task. Inspired shows time and time again they have what it takes to be a leader in the industry. DVST8 Worldwide gives people just a taste of what Inspired can do. It shows that Chris Waldrum is more than just a CEO of a supplement company, he actually cares about his customers and listens to the voices from across the pond.

What better way to give back, then to create a pre workout anyone can use all around the globe? PricePlow is a major fan of Inspired’s entire line of products and we know there is much more to come in the future!