NOTE: Legend has been reformulated! See our new Ghost Legend (V2) blog post. The original formula is discussed below, and this article will remain until it is sold out everywhere. 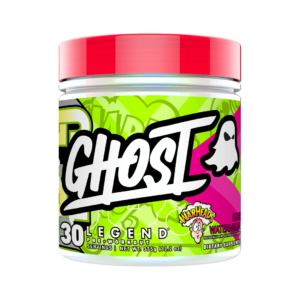 Last year, Ghost burst onto the scene like a supernova with a sense of style and swag that we’ve never really encountered in this industry. They had it all, slick packaging, a longtime industry big wig calling the shots, and more than one pretty face to show off the brand – all while keeping it real with open formulas.

Sure, they could easily pass as one of those “all show-no go” brands that we see all the time, but as we saw with Ghost Whey, these guys mean business!

In addition to fully opening up their product labels, Ghost recently revamped their popular pre-workout, Legend. The modifications and transparency have significantly elevated the product above its predecessor and make it a top “medium-stim” pre-workout you’ll find in the gym.

We’ve got the full breakdown below, but first take a moment to check the best deal and sign up for alerts with PricePlow:

Use our PRICEPLOW coupon to save 20% off all purchases on GhostLifestyle.com!

Successful companies rarely grow complacent, as they continuously innovate and improve their product profile. Ghost is a perfect example of this type of a restless brand – not only do they release new products at a rapid rate, but they’re constantly looking at potential reformulations that can further enhance existing products!

As such, their flagship supplement, Legend, has seen a few iterations over the years. Each variation has been influenced by new information, either coming from research or customer feedback. Ghost wants their products to be the best of the best, and when it comes to getting a great workout, you’d be hard-pressed to find something as effective as Legend!

Let’s get into what each 12g scoop of this powerhouse pre-workout delivers!

We’ve had some very detailed discussion with Ghost about the brand’s launch and development within its first few months. While they may seem like a lot of flash and pizzazz, these guys are, at their core, about providing quality products backed by 100% transparent labels:

”My biggest goal is to show, via education… Yeah we’ve created a lot of buzz, yeah we’re design savvy and take good pictures and have some friends who do their thing on youtube but at the core is a great, fully disclosed product.” 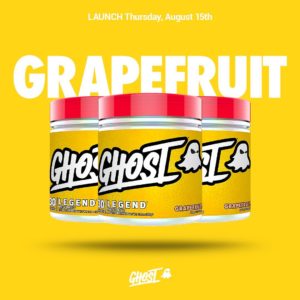 Add a little citrus to your workout stack with the newest Legend flavor, grapefruit!

When Legend originally launched, it was only available in two flavors; however, with new formulations comes new flavors! They’re all unique, as well, especially the new Grapefruit variation! Here are the flavors you can get your hands on right now:

We’ve had the privilege of tryingall of the Legend flavors (even the Warheads variations!), and they’re all downright delicious. Each one delivers the precise flavor the label promises – for example, the Warheads flavors remind you exactly of the super-sour Warheads candy from childhood!

Check out our review of the Sour Green Apple Warhead flavor of Ghost Legend here:

Are you ready to become a LEGEND? 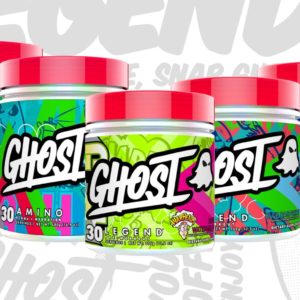 Ghost Legend allows you to round out your supplement stack with a solid pre-workout!

Legend’s overhauled formula is a significant step up in quality and transparency over the v1 version we say last year when the brand launched. Those interested in a moderately stimmed, pump-enhancing pre-workout will surely want to take a look at Legend.

It’s got the substance to match the style – but the crack addicts out there are gonna end up spending a lot of money if they need to two-scoop it, so make sure that this one is right for you!

Use our PRICEPLOW coupon to save 20% off all purchases on GhostLifestyle.com!