Posted on April 9, 2020 by Mike Roberto and CJ Luther | No Comments

While many of us have different reasons that drive our fitness efforts, one common thread woven through almost everyone’s endeavors is the desire to be healthy. 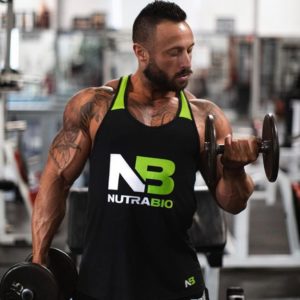 Health must come before performance. and NutraBio wants to help support you with products that optimize both!

Exercising, eating nutritious foods, keeping our diets in check, getting enough sleep, and various other things are only pieces of the entire picture. Sometimes, however, things can interrupt this lifestyle, and often they’re out of our control.

A few such situations happen during cold seasons, or when we start to feel under the weather and must battle a bug. There’s nothing fun about getting sick – it takes us out of our daily routine, makes it hard to focus or function, makes our bodies ache, and depending the severity of the illness, can be very dangerous. It’s triple difficult if living with loved ones, especially young or old.

As unfortunate as these times are, you really can’t avoid them. Sure, making healthy choices and staying metabolically fit helps keep our immune systems in optimal form, but getting sick every once in a while is nearly inevitable. The best we can possibly do is prepare, giving our bodies the nutrients, minerals, and mechanisms it needs to maintain an iron-like immune response that can hopefully ward off any pathogens or viruses it may come into contact with. Not only that, but if we do happen to fall ill, making the right choices can help us get back on our feet sooner! 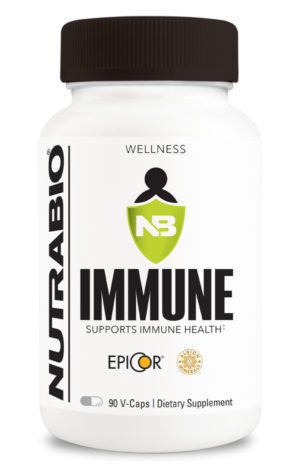 One of the very first products in NutraBio’s Wellness Series is Immune!

Seeing the potential to create an impactful supplement in the area of immune health, NutraBio CEO Mark Glazier and his team quickly jumped on the opportunity. Following the release of their incredibly powerful, novel single-ingredient product NutraBio EpiCorⓇ, the formulators at NutraBio are back with a more comprehensive immune support supplement – NutraBio Immune!

Featuring EpiCorⓇ, this label expands much further than one ingredient, compiling an assortment of some of the top, most “essential” immune-boosting ingredients available. NutraBio Immune supplies an array of health-boosting compounds and vitamins/minerals that the immune system heavily relies upon, which in turn help strengthen it as it fights off unwanted bacteria and pathogens. You also won’t find cheap minerals inside – as discussed below, NutraBio is using the good stuff from Albion Minerals.

Whether it’s the height of flu season or a time when something more serious is going around, getting your immune system the things it needs to fire on all cylinders is imperative – NutraBio Immune might do just that!

Before we jump into the immune-boosting power behind this timely new arrival, make sure you’re all caught up with PricePlow’s NutraBio news – we can help you find some great coupons on some of the best stuff in the supplement game!

Just as expected with any NutraBio product, Immune is fully loaded, transparently dosed, and 3rd-party lab tested. In one bottle it contains 90 capsules, and they recommend taking 3 capsules per day with meals, giving you a month’s supply.

Most importantly, NutraBio only uses bioavailable forms of ingredients (especially the minerals) to make sure you’re getting the best product possible. We all know that if your body cannot properly absorb the ingredients, then they will just be wasted. Immune features a robust formula that was designed to boost your internal defense mechanisms, so let’s see how it accomplishes that! 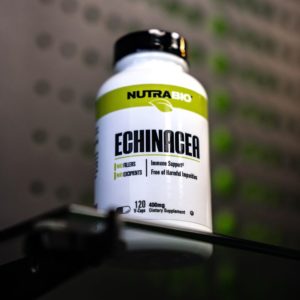 NutraBio’s Echinacea is a great supplement to stack with NutraBio Immune!

One potential misunderstanding we must address here is that NutraBio Immune does not necessarily prevent catching a cold, the flu, or other illnesses. These things are often out of our control, and the best we can do is to simply prepare – this means making healthy decisions such as eating nutritiously, sleeping well, reducing stress, exercising, among other things. If these are all things you are practicing daily, then you’re doing just about everything you can to support a healthy immune system and well-functioning body.

Getting in an adequate amount of vitamins and minerals can surely help strengthen the immune system, and though NutraBio supplies a number of ingredients that do just that in this supplement, it by no means yields an infallible immune system. Supporting it is the best you can likely do, but that’s not a bad thing! Why wouldn’t you want to maximize the strength of your immune system, which in turn, can help minimize the chance of catching the seasonal “bug”?

This supplement takes care of quite a bit. We’ll always harp on metabolic health, which includes doing what it takes to keep body weight and body fat in normal range, insulin and blood glucose levels low, and blood pressure in a safe range.

But one solid immune-boosting ingredient you could consider adding is NutraBio’s Echinacea, to provide a bit more “herbal” support in boosting the immune system.

Though NutraBio has their hands all over the supplement industry, they have set their sights on immune support supplements for the time being. It was slated for this fall, but “things happened”, accelerating this launch. Given the time in which this product is hitting the market, it makes total sense – the world finds itself in an unprecedented situation, and doing everything we can to keep ourselves and our neighbors healthy is of paramount importance. That checklist of things begins with the obvious – washing hands, keeping distances, staying at home if you get sick – but there are certainly other things you can do to try and stay healthy – including not being nutrient or mineral deficient!

Our immune systems are, as most bodily systems are, incredibly complex. They’re also intrinsically linked, which ultimately provides us a multitude of ways we can effectively enhance them, as well as potentially weaken them. The best we can do is make smart choices, fuel them with nutrients they need, and do other things that support immune health. This is true in all environments, regardless of the virus or “bug” going around at the time.

In NutraBio Immune, NutraBio is supplying a concoction that packs multiple compounds vital to staying healthy. This product has just about everything you could be looking for in an immune support supplement, from antioxidant power to white blood cell-promoting effects. While it certainly isn’t exactly “what the doctor ordered“, per say, it’s about as close as you’ll get in the supplement industry!