Important: Norcodrene has been discontinued, in lieu of Alphamine Capsules. If you’re a fan of this formula, get it while you can! 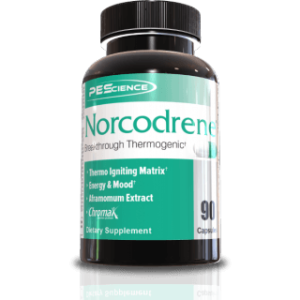 PES isn’t done revamping their products yet. Right after they revamped Alphamine, the brand has now neutered Norcodrene.

PEScience recently brought the weight loss world to a near standstill when it announced that it had reformulated their wildly popular, powdered fat burner, Alphamine, turning it into more of a glorified energy drink for soccer moms and sorority girls than a true fat burning powder.

The changes apparently haven’t stopped there. In conjunction with the revamp of Alphamine, PES has also gone back and re-done their well-known capsule-based fat burner, Norcodrene.

We can get a bit more behind this change, although we really don’t consider it as much of a fat burner now — it’s now more of a “mood enhancement pill” than a thermogenic.

Since Norcodrene was never really a high-stim product anyway (and there’s a billion excellent fat burners that are), this just might work so long as you know what you’re looking for.

We’ll cover the changes in just a second, but first, make sure to sign up for PricePlow alerts and check the best deal:

Note: In the above price comparisons, you’ll need to check the labels at each store to see what version you’re getting, or contact them if you’re not sure. If you see “yohimbe” in the label, then that’s the old version.

Noticeable changes right off the bat are the removal of SA2-A (Yohimbe extract) and Norcoclaurine (Higenamine). As we noted in our Alphamine blog, the changes to these two formulas may be due to international bans on Yohimbe and other “edgy” stimulants like higenamine. We’re not 100% certain of that, but we do know that from the looks of it, this formula may not have anywhere near the firepower that the previous iteration had.

So right off the bat, we’ll tell you that if you are looking for mood enhancement but not “insane fat burning energy”, you might be in luck: 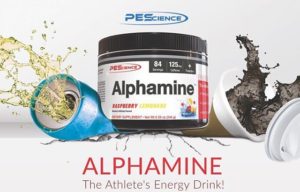 Honestly, Norcodrene’s change-up doesn’t upset us as much as Alphamine’s did. We wish they would have kept the OG Alphamine and called the new one “Alphamine Lite” or something.

Just like Alphamine, the “fat burning” part has been neutered. The good news with Norcodrene is that the “feel good” part has been kept and possibly improved… and it was never high-stim in the first place.

We almost think that this belongs more in our “mood support” category than it does in the “fat burners” at this point on the main PricePlow site. If that’s what you’re looking for, then you’re in luck.

PES recommends to not exceed three (3) capsules in any 24 hour period, and to not use the product for longer than 8 weeks without taking a 4 week break.

For stimulant lovers, there’s not much to get excited about here. And that’s a bit of the point – it’s not a supplement for “excitement”, it’s a pill for chilled-out mood-enhancement.

PEScience keeps changing… but some of these reformulations leave some core users in the dust.

While not as egregious as the Alphamine re-do, PEScience’s Norcodrene reformulation takes out some of our favorite fat burning ingredients from its predecessor and what you’re left with is a caffeine pill that helps you feel more relaxed with a dash of fat burning capacity.

We’re honestly not sure whether we should call it a “lite fat burner” or a “feel good energy pill”, but it’s pretty clear that PEScience is targeting a broader part of the market, and is moving away from the high-stim market. That’s fine – there’s plenty of other companies doing that.

In an effort to please everyone internationally, we just fear that they’re going to please no one locally within their industry, but given the lack of low-stim options, this might work in PES’ favor.

Is it the worst formula out there? Definitely not, it’s just not what anyone at PricePlow is looking for right now. You might be the opposite. This is another step in the taming of PES and sidles their products right along the more generic fat burners on Amazon that don’t seem to have as much intensity to them. Once again, we’ll be revamping our Top Fat Burner List and neither Norcodrene nor Alphamine will be appearing on it going forward, and that breaks our hearts.

We can only pray they don’t do anything to their Select Protein.

Note: In the above price comparisons, you’ll need to check the labels at each store to see what version you’re getting, or contact them if you’re not sure. If you see “yohimbe” in the label, then that’s the old version.