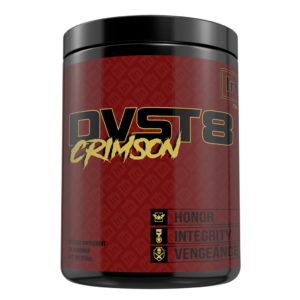 Inspired Nutraceuticals has released a follow up to their popular White Cut pre workout with a more streamlined economical version in DVST8 Crimson.

The pre workout landscape has taken a number of different forms over the years. Initially it was all about the “ultra-concentrated” condensed pre workout that was pure crack n’ stim. Then came the age of the all-inclusive pre workout, which included all the acute and saturation ingredients you could ever want in a pre workout.

Today, we’re in a bit of a cross between the two — some users don’t want the full blown, decked out Lamborghini pre workout that costs $2/workout. They just want something to kick their ass to get in the gym and absolutely destroy the weights.

Inspired Nutraceuticals has already delivered their high-end pre workout in DVST8 White Cut, which met rave reviews with our crew. But now, Inspired has crafted their spin on the “streamlined” pre workout which offers much more than your typical “condensed” pre-workout (those that typically only offer a high doses of caffeine, beta alanine, and yohimbine.

DVST8 Crimson was created to offer an “otherworldly” experience at a more affordable price — something that everyone could use (and afford!).

Before we go any further, take a moment to sign up for PricePlow alerts and receive great deals from around the web: 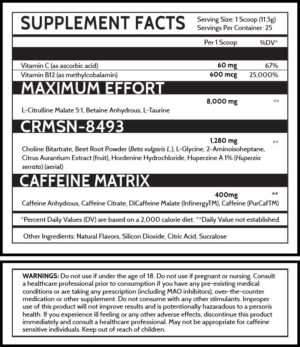 Crimson’s label is a more “trimmed down” version of White Cut, for the everyday lifter who doesn’t want the “Ferrari” of pre workouts that is White Cut.

DVST8 Crimson is a very different beast from Inspired Nutraceuticals headlining pre workout DVST8 White Cut. The formula is more “closed up” and proprietary than White Cut (more on that later!), and a bit different as it’s geared to a different end user than the more robust White Cut.

Quotes from Inspired on the Formula…

Fans of DVST8 White Cut may be wondering why Inspired Nutra even released another version of DVST8 that may be deemed by some as a “weaker” product, so we reached out to the brand to see why they created DVST8 Crimson at all:

”Crimson was created to fill the gap that White Cut could never fill, the stim heavy “baller on a budget” category. People love the focus of White Cut, but not everyone wants to spend $50… in came Crimson. Still a big dose of the proven ingredients, but will twice the amount of stimulants. We also replace the synephrine with bitter orange and yohimbine(something not everyone likes) with huperzine.

Additionally, you’ve also no doubt noticed that Crimson is a much more “closed up” the label so to speak compared to White Cut, so we also put that question to Inspired Nutraceuticals, who responded:

”We only switched back to a blend on this because of how well White Cut is doing, and how easily it has been mimicked. Plus, Crimson it not meant to be a “premium” pre workout like White Cut, so the crowd who is interested in Crimson doesn’t care as much as if it has 8g of Citrulline, 4g Betaine, etc… So there was not a point, and it protects Crimson’s unicorn magic.” 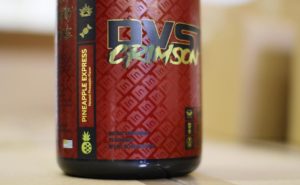 Normally, we’d be happy with that, but DVST8 White Cut has some of the best taste we’ve ever seen – so those are going to be tough to beat!

Side Note: We honestly love when companies go the no artificial color route, as there’s really no need for them at all, and we’re tired of our shaker bottles getting stained from all the nasty fake dyes used in a lot of products. Just think, if it stains the inside of your shaker, what’s it doing to your insides?!

While we may not be fans of the more closed up label on Crimson, we can understand Inspired Nutra’s reasoning for closing off its energy blend. White Cut was a fantastic product, and as pointed out above, can be (and possibly has been) copied by others in the industry seeking to craft a pre workout with the same supreme energy, focus, drive, and performance of DVST8 White Cut.

Crimson is a more economical version of White Cut that will deliver the same drive, but without as many bells and whistles (no GPS, sunroof, etc to keep the car analogy rolling) as it’s more robust older brother. Still though, Crimson’s profile is solid and will definitely bring all the pumps and performance most “everyday” users will want in their go-to pre workout.