Alpha Lion is no stranger to making statements within the supplement industry. Virtually every new product or flavor they bring to market gets copious amounts of attention, an expected outcome considering the brand’s resounding track record. Some of our favorite products of 2019 have come from Alpha Lion, such as their stacked protein powder, G.O.A.T.EIN, or GAIN-O-RADE, their reformulated EAA plus hydration booster. However, there happens to be one specific product that separates itself from the pack – one that is so powerful, so effective, that when a new variant is introduced, we can’t help but talk about it! 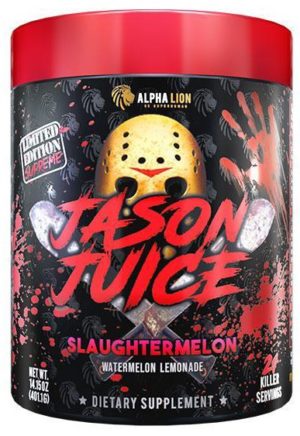 SuperHuman Supreme is back for Halloween, and it’s in the form of JASON JUICE

SuperHuman Supreme is back, and it looks killer

SuperHuman Supreme, the once limited-edition, now here-to-stay high-octane pre-workout formula absolutely blew us away when it was first released. This intense, high-stim label supplied a workout experience like no other, one so powerful that the brand had to bring it back full-time. Make no mistake, SuperHuman Supreme is not for the faint of heart – it’s heavy on stimulants, designed for harcore stim users only.

What else isn’t for the faint of heart, you ask? One might argue that horror films, which enjoy their peak around Halloween, are so intense that only a select few can handle them. A perfect pre workout inspiration!

The newest flavor of this hardcore pre-workout is JASON JUICE, an homage to the slasher subgenre that inspires countless decorations and costumes around Halloween. If you’re looking to test out one of the most powerful pre-workouts in the industry, and are feeling festive, JASON JUICE has got you covered!

In this post, we’re going to tell you a bit more about its flavor, Slaughtermelon, as well as touch on the ingredients that make SuperHuman Supreme so extreme! Before we get into that, as always, subscribe to PricePlow for the top deals, news, reviews, and interviews in the supplement industry!

Halloween captures the hearts of many thanks to none other than candy! It’s hard to mention the spooky holiday without mentioning these sweet treats, which makes this season especially challenging for those looking to maintain a diet. 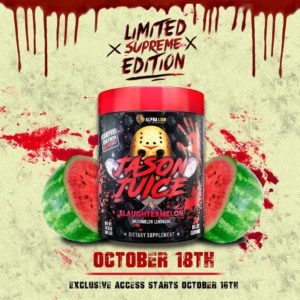 Hurry up, Jason Juice is a limited edition

While we believe that moderation is key in this regard (go ahead, have a piece of chocolate, you’ve earned it!), supplement companies have gotten exponentially better at flavoring their low-calorie products to taste just as good as some candies, if not better! Alpha Lion, known for some outrageously tasty flavors, clearly had a tall task in front of them by tying a new flavor exclusively to Halloween.

No need to worry, however – Alpha Lion nailed this one! JASON JUICE Slaughtermelon is a sweet, candy-like watermelon flavor, on par with its individually-wrapped equivalent you sneak out of your child’s candy stash. This flavor packs a serious hit of sweetness, one that matches up with the intense energy it delivers, too!

Now that we’ve talked about this awesome, competition-slashing flavor, we’d be remiss if we didn’t mention the ingredients of SuperHuman Supreme. As we said earlier, this product is serious, meant for only those who are experienced with the hardest-hitting stimulants on the market. This product gets you absolutely amped, raising energy levels, adrenaline, and intensity to seemingly unreachable levels!

Make sure you check out our main post, which takes a deep dive into each ingredient in this formula. But, here’s the quick gist on what SuperHuman Supreme brings to the table:

(You can read the full analysis in our main SuperHuman Supreme article).

So Alpha Lion goes hard on stimulants here, packing over 375mg of caffeine, while also tossing in exotic stimulants like DMHA to further boost energy levels. This pre-workout gets you absolutely wired, but again, it’s not for everyone. Before you take a serving, make sure you know your stimulatory limits, and if you find the need to reach for SuperHuman Supreme on a regular basis, you should double check your stimulant dependencies!

This is the ultimate emergency kit pre-workout – it’s not something you’ll need everyday, but in big moments, such as hitting a new training PR, you’ll be glad you have it! 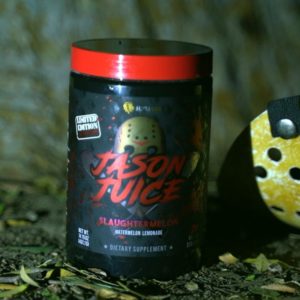 Alpha Lion has been on an absolute tear in 2019, hitting us with tons of new products that are amongst the best in their respective categories. If you’re searching for a top-notch supplement, odds are you can find a fantastic option from these guys. We’ve touched on a few, such as G.O.A.T.EIN and GAIN-O-RADE, but when it comes to pre-workouts, Alpha Lion truly shines brightest.

Too much stim? Try the OG SuperHuman

The original SuperHuman was their flagship pre-workout energizer, packing serious energy and pumps for those adding it to their arsenal. But, because Alpha Lion strives to be the best of the best, they didn’t stop there – they released SuperHuman Supreme, an even more serious pre-workout, and found it so popular that they had to turn it from a limited release to a full-time product!

Supreme has had other fun flavors, such as the initial FREEDOM JUICE launch on the 2019 4th of July. It worked so well, they had to do it again for Halloween!

Another release, another win for Alpha Lion! Make sure you stay tuned to PricePlow – we’ve been covering Alpha Lion’s hot 2019 all year, and although the year is drawing to a close, the brand has no plans to go quietly into the night. They have some awesome things coming soon, and you’re going to want to be in the know!