In early 2018, 5% Nutrition released a unique and groundbreaking low-carb, dairy-free protein bar named Knock the Carb Out, sometimes abbreviated as “KTCO”. To see if the bar really lived up to its name, we performed blood sugar and ketone testing before and after eating them. Long story short: not only do they taste great, but they worked as intended. 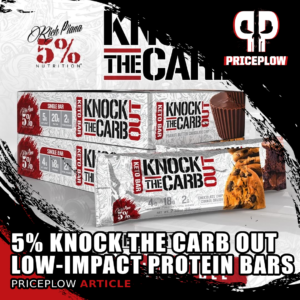 5% Nutrition Knock the Carb Out Bars are back in a big way, and have a new Chocolate Brownie Bar flavor too!

Three years later, we’re proud to announce that the brand behind Rich Piana’s legendary name has also updated the labels for their new white “legendary” look, and they’ve added a new flavor!`

To complement the Chocolate Chip Cookie Dough and Peanut Butter Chocolate Chip flavors, 5% Nutrition has also added Chocolate Brownie Bar to the menu, and in our opinions, it’s the best flavor yet!

These gems have a simple premise: low active carb, unafraid of fat, dairy-free and whole-food based, but still delicious and nutritious. As always, 5% Nutrition is trying to stick with “real food” ingredients for this product – and different flavors use different methods to get there (both with egg whites, but peanuts or almonds as a base). You’ll recognize everything on the ingredients list, but there are some artificial sweeteners!

Get ready for a good one here!

With a name like “Knock the Carb Out”, we’re obviously expecting a low-carb dieter friendly product. Their panels range from 4 to 6 net carbs per bar and 18 to 20 grams of protein per bar, making them the perfect snack to help low-carb dieters get through their day and not get wrecked by a nagging sweet tooth. They’re satisfying, they’re clean, and they’re delicious.

5% Nutrition delivered when they launched in 2018, and they delivered again in 2021. Sign up for 5% Nutrition news and deal alerts below while comparing prices with PricePlow, then let’s get to our blood testing and ingredient analysis:

Although Mike wasn’t in a state of ketosis when blood testing (towards the end of the review above), these bars did something amazing: they only raised blood sugar 25 points (for peanut butter) and 29 points (for dark chocolate)! 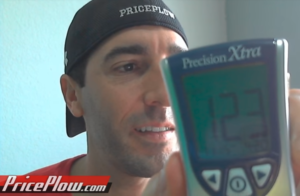 390 calories and only a jump of 24 blood sugar points after 45 minutes?!?! Color us VERY surprised. And yeah, blood sugar started at 99… not exactly the best, but so it goes.

It hardly stopped the transition into a deeper state, as beta hydroxybutyrate readings dropped 0.0 and 0.1 points in the two tests. Only one test is on YouTube though, due to camera issues – apologies from Mike for that.

So while these aren’t necessarily bars that would “get you into ketosis”, they’re most definitely “friendly” — for Mike at least — if you’re already in and are willing to take a minor (but not at all overwhelming) blood sugar impact.

Given the amount of protein inside, this shows that these new prebiotic fibers are indeed something not to be too scared of (again, for Mike at least), and the higher-fats with egg whites and peanuts don’t seem to disrupt things even as much as a straight scoop of whey protein.

Knock the Carb Out Nutrition and Ingredients

As the nutrition labels show, the flavors range pretty substantially as far as their fat content is concerned. In fact, one may even consider these two completely different products! Peanut Butter Chocolate Chip is peanut based, while Chocolate Brownie Bar and Chocolate Chip Cookie Dough are Almond based.

Knock the Carb Out Macros

Mike took the bars to task by measuring their impact on his own blood (skip to it here in the review). He found that the dark chocolate chip bar only raised his blood sugar by 29 points. While BHB levels dropped from 0.3 to 0.2 in 45 minutes, this is still impressive. The peanut butter flavor fared better, as it only caused a 24 mmol blood sugar jump with no overall impact on BHB levels.

The newer versions here actually vary less than the original versions, which had much higher total fat in the peanut version before. It seems that there’s been a shift from the higher fat base to more protein, and it’s likely the bovine collagen powder that made this possible!

For the new version discussed above, look for the white labels at the stores. If you see black boxes, those will be the older versions — and if you’re huge fans of those flavors, stock up while you can!

You ready to Knock the Carb Out?!

Just like with the various other Legendary updates we’ve covered on our 5% Nutrition news page, and what we said in our original article on KTCO Bars, “Rich would be proud”.

That’s because 5% Nutrition hit the mark with these bars, and then some. We got everything we wanted: a delicious, low carb protein bar that doesn’t leave us starving. The ingredient label is flush with real foods we had sitting around our kitchen. The blood sugar impact was negligible.

And we even have some distinct flavors, and it’s just sweet enough thanks to sucralose. We want an easy snack when low-carb dieting (carbs are everywhere, we need something other than plain nuts and beef jerky!).

For our low carb followers, we fully believe these bars deserve a place in your next online supplement shopping spree. They’ll deliver that “naughty” feeling of going off diet while still allowing you to stick to a low-carbohydrate lifestyle. Just like Rich would want.

Note: This article was originally published on May 31, 2018 and updated October 21, 2021 with the Legendary “white” label formula.