SmartPrime-OM is a novel omega-3 amplifying dietary supplement from Nutrashure, so we interview Dr. Hector Lopez to understand how it boosts EPA/DHA!
Show notes at https://blog.priceplow.com/podcast/dr-hector-lopez-nutrashure-smartprime-064

Are you one of the tens of millions of Americans who have taken an omega-3 supplement?[1] Are you a supplement formulator looking for a new innovation in the fatty acid / fish oil space that might actually improve health?

If so, read on… this podcast and series of show notes is for you. 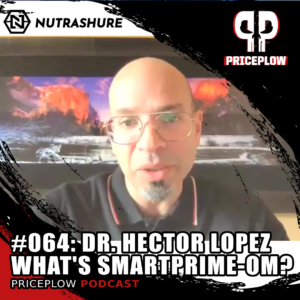 SmartPrime-OM is a new omega-3 amplifying dietary supplement from Nutrashure, so we interview Dr. Hector Lopez to understand how it boosts EPA/DHA!

We sat down with Brandon Sojka, founder and CEO of Nutrashure (website, Instagram, news alerts), and Dr. Hector Lopez, a specialist in sports medicine and nutritional biochemistry, to discuss Nutrashure’s new ingredient, SmartPrime-OM, which is designed to help optimize the omega-3 levels of those who take it.

This is a novel, naturally-sourced dietary supplement ingredient technology that is one of the most promising things we’ve seen in years.

One of the many interesting things about SmartPrime is that it can raise omega-3 levels independently, without the use of other supplements – but it can also be combined with an omega-3 supplement for an even bigger effect size.

Before we get into the timestamps and show notes, sign up for our Nutrashure and SmartPrime news alerts:

This was quite an intense conversation, and we will have more articles coming out when the patents and research studies on SmartPrime are published. Additionally, we’ll cover the new supplement formulas that come out using SmartPrime.

To stay abreast of the information, we suggest signing up for our Nutrashure news alerts, which can be done below:

For those looking for more details on Dr. Lopez’s history, the timestamps are below: