Wants, desires, commitments, distractions — our lives are filled with endless demands, as our day-to-day oscillates between tasks to do and persistent interruptions. In a fast-paced and highly-virtual environment, there’s a premium value on the ability to stay focused on important tasks and remove distractions so that we can stay happy and calm.

Arms Race Nutrition (ARN) has been around for a few years now, smashing every obstacle in their path. The first time we covered the brand led by uber-popular fitness influencer Julian Smith and industry pioneer and professional bodybuilder Doug Miller, we wrote about the original Arms Race Clarity capsule formula. The dynamic duo, backed by an all-star team, has turned ARN into far more than an “influencer brand”. 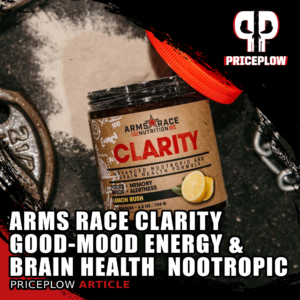 It was time to reach more “Arms Dealers” with a nootropic that best serves their following:

Arms Race Clarity originally began as a unique “wellness nootropic” that aimed to optimize mental focus and well-being. It’s now shifting away from the “mental health” category a bit, moving towards an energized nootropic and brain health formula.

Clarity still has the mood-boosting adaptogenic nootropic bacopa monnieri, but now also has Sabroxy extract standardized for oroxylin A, which we think has serious potential in supplements like this. There’s also plenty of carnitine, choline, tyrosine, and caffeine-synergizing enXtra.

In this post, we’ll dive into the new Clarity Powder formula. Before we get to that, make sure you’re signed up for Arms Race Nutrition news and deal alerts so that you can stay up-to-date with what Smith and the team have going on.

In a single 1 scoop (9.7 gram) serving of Clarity Powder from Arms Race Nutrition, you get the following:

Now that it’s no longer in capsule form, we have flavors — and Clarity Powder takes some notes from the recent Nite Nite launch: 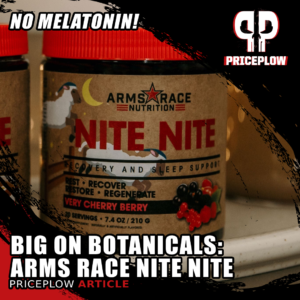 No melatonin and big on botanicals — Arms Race Nutrition’s Nite Nite sleep aid is exactly what much of PricePlow Nation has been looking for! Clarity steals the Very Cherry Berry flavor.

Find Focus and Calm Energy with the New Clarity

Arms Race Nutrition prides itself on blending old-school dedication with modern science to deliver a strong line of supplements for driven, committed individuals – including the ARN team themselves. Such levels of dedication demand putting in hard work, which can be extremely taxing on the brain. The ARN Team knows this and, thankfully, they’ve created a product that can be of use in this regard.

Julian Smith found his success through an incredible amount of grit and determination, launching multiple business ventures while growing his online presence and making gains in the gym. Add Doug Miller’s supplement and business expertise and David Dodrill’s drive to the mix, and you have a team that’s quite simply been unstoppable as of late.

Clarity is delivered in this science-backed, efficacious formula that can help raise your game to levels that help you spend mental energy on the things that warrant it, not the things that are going to waste it and hurt your mood. If you need some help locking into your priorities and keeping your spirit on-point, Clarity powder is worth checking out.

Note: This article was originally published on March 25, 2021 and was updated on October 25, 2022 with the new powder label. The capsule version may still be available – for a write-up, please contact us.