Arms Race Nutrition Stabilize Updated to HIS and HERS Formulas

April 2022 Update: Arms Race Stabilize has been reformulated into two gender-specific Stabilize His and Stabilize Hers formulas!

The original Arms Race Stabilize formula – a whole-body hormone optimization formula – was a great success, but many customers wanted some specific benefits for themselves. So it’s been split into His and Hers formulas, with a few same base ingredients, but a few changes that are uniquely beneficial to men and women!

This article details the His formula below, but you can first comapre the updated labels: 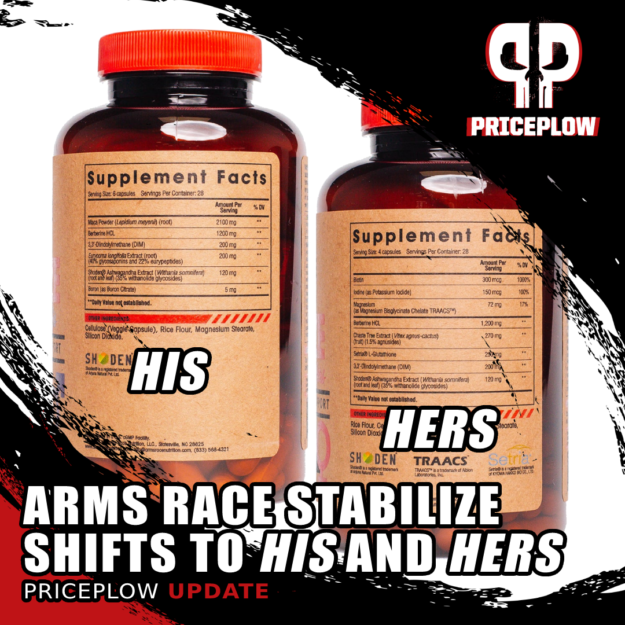 In six capsules, men get:

In four capsules, women get:

His vs. Hers formulas

What we love about these formulas is that they both focus on three hormones that affect both men and women — cortisol, insulin, and estrogen. To help control them, both formulas utilize ashwagandha, berberine, and DIM (respectively), which are effective ingredients in both men and women.

However, women will get some extra menstrual (and menopause) support in chaste tree extract, alongside critical minerals like iodine and magnesium. Men get the feel-good, libido-boosting ingredients like maca and longjack, which will near definitely put some pep in their step.

You can see the availability using PricePlow, and sign up for alerts:

In a single, 6 capsule total daily serving of Arms Race Stabilize His, you get the following:

If you fast in the morning, you can just consider it your “first and second meal”.

Pre-meal or meal-time dosing is due to the inclusion of berberine, which is best taken just before eating carbohydrates.

Rather than focusing on just one dimension of a man’s experience, the Arms Race Nutrition Stabilize His formula manages to provide comprehensive support for male well-being. From increasing energy with maca to helping improve body composition with berberine and bolster vitamin D and magnesium status with boron, this really is a successful tonic for overall male health.

The inclusion of the Shoden ashwagandha extract is particularly notable since it’s a very powerful adaptogenic ingredient that has significant effects for most who supplement it on its own.

You can also read about the Stabilize Hers formula on the PricePlow Blog.