Posted on November 17, 2021 by Mike Roberto and Nick Andrews | No Comments

Note: This product has been renamed to Goon Energy. We will be updating shortly.

On 11/11/2019, Glaxon was born, innovative new formulas based on unique ingredients chosen for maximum bioavailability and effectiveness. Since that launch, this team of radical mad scientists and all-around cool guys has developed a true cult following in an industry that had been stagnating from a scientific standpoint. With their underground guerrilla marketing aesthetic and ultra-rigorous, hardcore scientific formulations, Glaxon is helping to make the supplement industry hip and fashionable in new ways. 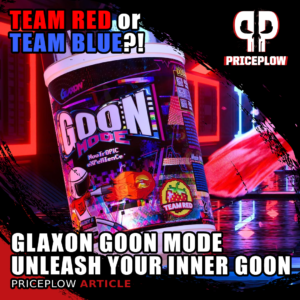 Today we’ll be talking about Glaxon Goon Mode, an energized nootropic focus supplement for gamers and anyone else who needs to push the limits of their cognitive performance. It was launched on Goon Day in 2021, which is the brand’s birthday.

At 62.5 milligrams of caffeine per scoop, and sixty scoops per tub, you have very flexible dosing here, and can go up to four scoops for maximum potency. But note, as is tradition with Glaxon supplements, Goon Mode is far stronger than it looks!

The details are covered below, but first, see PricePlow’s coupon-powered prices and then see the introductory videos below:

Goon Mode launched in two flavors, but the list will be updated below if more arrive:

They’re naturally colored, and stick to fruit flavors that come in their color scheme (ie Team Red is cherry, strawberry, and pomegranate while Team Blue is heavily blueberry based).

Not sure how it all adds up? See the Dosage Walkthrough on Goon Mode’s label!

Trust us, 2-3 scoops is stronger than it looks! 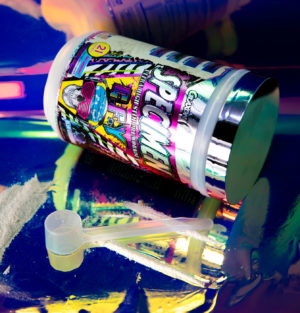 Need even more energy for pre workout? Then this graphic about says it all…

We love this nootropic, and think it’s suitable not just for gamers, but for anybody who’s doing intense mental work. For college students who are scrambling to prepare for exams and need an extra edge, Glaxon Goon Mode Nootropic could be a great alternative to more traditional stimulants.

Don’t be deceived by the low caffeine dose – four scoops hits far harder than you’d expect, and you’re likely fine in the 2-3 scoop range for most activities (and if you need more, then it’s time to start talking about the Specimen pre workout).

Expect to see more from ingredients like Brain Factor 7 and English Ivy Extract, which definitely put a little more action in this incredible gaming supplement.

Our only question for readers is, which team are you on? Team Red or Team Blue?