Since hitting the supplement scene in 2019, AstroFlav has established a reputation for being one of the most consumer-oriented brands around. They’re great at getting customer feedback and running with it.

This year, we’re finding that nobody in the industry does more than AstroFlav when it comes to continually refining and tinkering with their products. Their primary values are trust, compassion, integrity, and results.

This translates to 100% transparency with fully disclosed labels, the use of premium ingredients, and most importantly, ASTROnomically great FLAVors. In that vein, AstroFlav really lives up to their name, especially with their recent IsoMix and VeganMix releases. 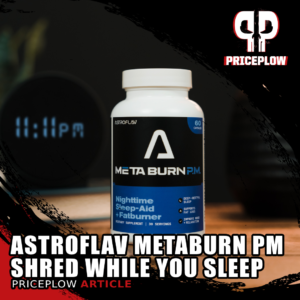 But today, we’re talking about capsules – no flavor needed here. It turns out that they’re just as good at formulating these types of supplements, too.

A lot of ingredients that promote sleep don’t really taste too great. When a company with a strong flavor game like AstroFlav comes to play in the sleep-aid category, we always sit up and pay attention.

Instead of trying to overwhelm a powder on the flavor front, they’re instead making a hybrid supplement that doubles as a fat-burning sleep aid: MetaBurn PM.

Combining these two categories into a single product makes a ton of sense when you think about it. It’s suggested that we’re able to burn more fat at night when we’re asleep (through the breath, no less[1]), thanks to the fact that insulin levels naturally fall during sleep.[2]

The natural drop in insulin during sleep makes it a great point of leverage for amplifying fat loss – your body is primed to lose fat when asleep. After all, fat oxidation grinds to a halt when either blood glucose or insulin levels are high,[3,4] so let’s take advantage of the times when they’re destined to come down. Sleep is, after all, a forced fast of sorts.

Meanwhile, sleep is so important for fat burning and healthy-body composition that restoration of adequate sleep has been proposed as a treatment for obesity.[5] And sleep disturbances have even been shown to interfere with weight loss.[6]

With that said, let’s get ready to jump into MetaBurn PM’s mechanisms to boost sleep and fat loss even more, but first, check PricePlow for news and deals:

In a single 2-capsule serving of MetaBurn from AstroFlav, you get the following:

No flavor? No problem. AstroFlav Continues to Impress 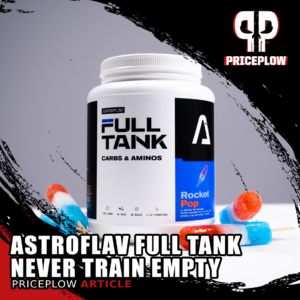 Make your last sets as strong as your first with AstroFlav’s Full Tank Intra-Workout Supplement.

The best supplements are organized around a coherent idea, and AstroFlav’s MetaBurn PM is a prime example of how this approach can be successful.

Almost all of the ingredients in this product improve sleep quality and accelerate fat burning. And what’s even better is that almost all of the fat-burning ingredients act on the same mechanism, which is the upregulation of non-shivering thermogenesis, either by increasing mitochondrial activity in existing brown fat or driving the conversion of white fat to brown fat.

It’s clear that AstroFlav put a lot of thought into their ingredient selection. We expect MetaBurn to not only improve the quality of your sleep, but also send your brown-fat activity levels into the stratosphere through the additive effects of multiple ingredients that act on brown fat by complementary mechanisms.