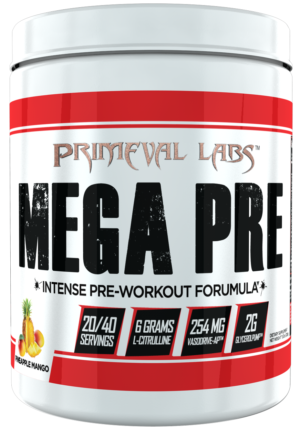 After a little delay, Primeval Labs is ready to rock the supplement world again with its stimulant free pre workout Mega Pre.

If you’ve been following the supplement newswire lately (which includes our YouTube channel), you’re well aware of who Primeval Labs is and have seen the brand making serious noise around the industry lately.

We’ve followed their incredible growth over the past few months, releasing such fast movers as the Hurakan fat burner, high-dosed laxogenin in Primavar, and their delicious-tasting amino product EAA Max. And don’t forget about EAA Max Energy either!

Amidst all of that, the brand has still been hard at work developing what may be one of the most heavily-loaded pump pre workouts ever created.

Mega Pre is the brand’s new monster pre workout, that’s packing it all in full clinical doses, but here’s the catch… there’s no stimulants.

We’ve got the details on Mega Pre down below, but first, take a second to sign up for price drop alerts and check the best deal with PricePlow:

As Seth Feroce would demand, this bad boy is packing some massive doses of the best vasodilating and performance-boosting compounds around, along with a few you’ve never used before!

Below is what you’ll expect with two scoops (which gets you 20 two-scoop servings per tub):

On the Formula: Why no stims?

“We wanted to develop a well rounded pre workout that was at the top level in pumps, focus, and power. Mega Pre delivers in each category we feel at the top of each class. Stimulants were removed because we felt the benefits without them outweighed the benefits with them. We wanted a true top tier performing pre workout, and we delivered just that.” 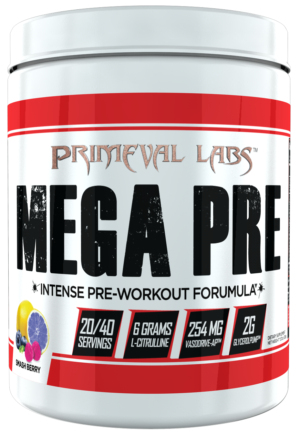 If you’ve seen our recent EAA Max Reviews on PricePlow’s YouTube channel, you’re aware the brand is a leader in flavoring. Launching the pre workout with two flavors, and both taste phenomenal to say the least. Those two flavors again are:

There’s also rumors that the brand is developing more flavors and they’ve definitely continued to deliver that over time, so stay tuned and sign up for alerts below for!

Mega Pre is here, and while we were initially thrown a curveball with the absence of stims, the product is still superior to most other pre workouts on the market when it comes to ingredient dosing. Yes, people love their stims, but caffeine tabs (or coffee) is cheap and can easily be added for those that need a kick to get going. But for those naturally energetic, or who’ve already had their stims for the day, Mega Pre is delivers everything you want to get the blood flowing during your intense workouts.

If you like massive pumps, gorging veins, and an all around superior pre workout that actually does what a pre workout should, then Mega Pre is can’t miss.

Stay tuned for our full review as we’re going to be all over this one over time – sign up for alerts and you’ll never sleep on a hot deal either!