Last week, we covered Primeval Labs Ape Sh*t Max Pump, a Nitrosigine and 3D Pump powered stim-free pre-workout supplement. Today, we get to meet its better half: the caffeinated version!

Primeval Labs Ape Sh*t Max: 400 milligrams of caffeine, but stackable to your tolerance 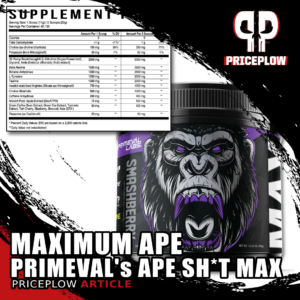 Prepare for 400 milligrams of MAXIMUM APE! But if that’s too much, you can titrate it down and keep pumps high by stacking in some of the stim-free version!

That’s right, the stimulant-based version, Primeval Labs Ape Sh*t MAX, which is quite similar to the stim-free pump version linked above… only it has caffeine and theacrine. And by caffeine, we mean a lot of caffeine – 400 milligrams!

But, since it has the same ergogenic formula as the stim-free version, you can stack the two to lower caffeine to the dose you desire, while keeping the pumps and endurance levels at maximum dosage!

Otherwise, you can treat yourself to 400 milligrams of energetic goodness, and let the inner ape out for a maximum-powered, Nitrosigine and 3D Pump inspired pre workout.

We’ve got the full analysis below, but that’s the short story. Let’s check stock and availability, sign up for Primeval Labs news alerts, and get to the good stuff:

In a single 2-scoop serving of Ape Sh*t Max, you get the following:

Many know Primeval Labs as the flavor kings: 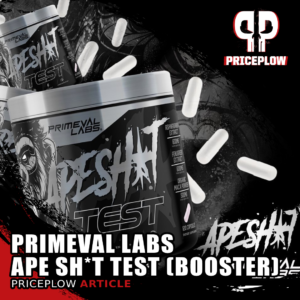 However, not all pumps are lost — wherever you reduce scoop size here, you can increase scoop size with the stimulant-free Ape Sh*t Max Pump to keep everything else at a full dosage! As long as you get 2 scoops total between the two supplements, you’re good to go on these dosages.

Alternatively, you can also consider stacking with the standard Ape Sh*t Pumps (a bit less strong, but more economical), or use the Nitrosigine-powered VasoGorge.

In summary, the sky’s the limit with the line from Primeval, but we like trying the 2-scoop-total strategy between the two Ape Sh*t Max products. It’s great to see wisely formulated product series that give you a chance to get the stim dose you want while also getting clinical doses of everything else.