2019 Update: Pitbull Labs unfortunately went dormant for a while, but rumors are that they’re coming back…. stay tuned and sign up for our Pitbull Labs News alerts to learn when they’re officially back! 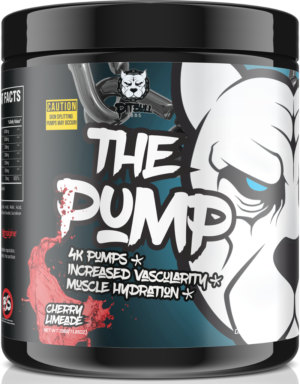 Nothing is more glorious, satisfying, or exciting than the vaunted muscle pump. For decades, bodybuilders, bros, and average joes have chased the pump, some (such as a gentleman named Arnold) going so far as to compare it to orgasm. But an explosive pump that could could never be had with total consistency… until now.

Scrappy upstart Pitbull Labs has finally released its stimulant-free pre workout that makes achieving the pump all the more easy, each and every time. Toss back one scoop of The Pump and you’ll have everything you need to achieve raging bicep rocks and more. It stacks seamlessly with the simply-title Pitbull Labs Pre Workout to form an unbeatable workout combo of mood, motivation, focus, energy, and, yes, pumps.

We’ve got all the details down below, but first, take a moment to check PricePlow’s deals and coupons and sign up for Pitbull Labs news alerts:

Check PitBull-Labs.com if you can’t find The Pump on PricePlow!

The Pump is all about ramping up nitric oxide production and keep it elevated during and after training, providing some of the densest, most massive pumps you’ve ever witnessed.

”So we went with 4g of pure citrulline, many people think 6g is where the studies are, however that is citrulline bonded to malic acid at a 2:1.

Nitrosigine is one of my favorite ingredients period. As per other expensive, clinically studied ingredients, it is often sprinkled in prop blends and under-dosed. 1500mg is where the real in vitro data is, which includes actual muscle biopsies – if you don’t know what that is, this is where they literally remove live tissue samples and exam its impact (shudder).

There is more data coming out showing it potentially has some neurotrophic properties, however the real reason its in here is it relaxes blood vessels which allows increased muscle blood flow and significantly increases plasma levels arginine, which plays a major role in nitric oxide synthesis. It also has bedroom related benefits…

Combined with Citrulline, this leads to relaxed and primed blood vessels ready to get pumped full of nitric oxide!

Perfect right? Well no, as usual our body wants to fight those gains!

As such it produces an enzyme called arginase that prevents your body making nitric oxide! That’s why we went the extra mile and included the arginase inhibitor L-norvaline.

Capros is a patented extract of the indian gooseberry. Its major function is to help deliver more oxygen to working muscles which results in more nutrient rich blood and an even greater pump. Now it is also a “super fruit” extract and has antioxidant and free radical scavenging properties.

Then we have the usual blend of chelated minerals and sodium to help hydrate the muscles.” — Pitbull Labs 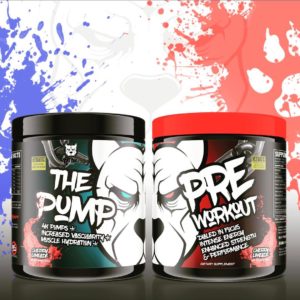 Want some added energy during your training session? Combine Pitbull Labs Pre Workout with The Pump for a complete pre workout experience

Similar to Pitbull Labs Pre Workout, The Pump comes in two flavors. Those two flavors happen to be the exact same flavors as you’ll find with Pitbull’s Pre to make flavor matching as seamless as possible, creating a pre workout combo that is both effective and tasty as hell!

The two flavors you’ll find The Pump in are: Blue Raz and Cherry Limeade.

Pitbull Labs The Pump is simple, straightforward, and effective as all get out. One scoop of this, and you’ll have a hard time not achieving a monster pump during your warm up sets. On its own or stacked with Pitbull Labs Pre Workout, you’ll be extremely pleased with your pumps and performance.

And if you want even more Citrulline (or just a “lighter” pre workout), feel free to sip on a scoop of the brand’s BCAA Stim during training, which contains an additional 2g of L-Citrulline!

Check PitBull-Labs.com if you can’t find The Pump on PricePlow!