Posted on September 9, 2021 by Mike Roberto | No Comments

Winter is coming, and if all indications are correct, this one might be a doozy. PEScience, the company we’ve long followed thanks to their Select Protein, recently released their psyllium husk based Regulate-GI, and now they’re entering the immunity niche just in time with Immune-ST. 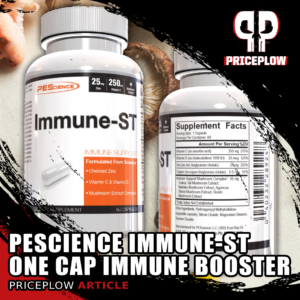 Already known for their TruMulti pair of men’s and women’s multivitamins, PEScience wants to provide a little bit extra for those who are traveling, preparing for the winter, concerned about pathogenic “exposure”, or have any other reason to need some immunity help.

In just one capsule, you get the following boost:

It’s important to note that the zinc and copper are of the chelated form that are bound to glycine, which show far greater uptake than traditional forms. Most multivitamins don’t use these, and they alone are worth it.

We get into the details below, but first, see PricePlow’s coupon based prices and sign up for our PEScience news alerts:

Although you can take two capsules in times of need, each serving is one capsule, which contains the following ingredients: 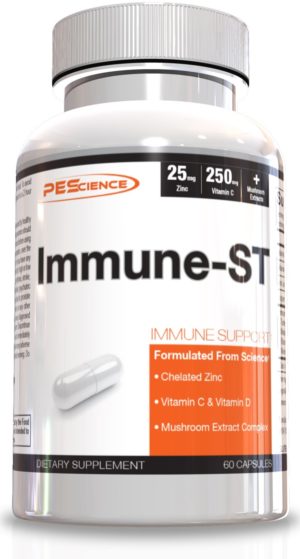 Just one capsule is all it takes, but take two in times of need

Combined with a high-quality multivitamin like PEScience TruMulti, taking one capsule per day with food is generally a good idea.

However, during times of travel, sickness, exposure to pathogens, or general high concerns, two capsules can be taken, preferably spaced out.

For many of us, immune system supplements don’t need to be overly complex or expensive — we just need to top off our current stores of key vitamins like C and D and ensure that we have enough zinc and copper to let our immune systems function optimally.

Combined with PEScience TruMulti and a high-protein diet (Select Protein or Vegan Select Protein can help there), your body’s immune system has a great base to work from.

As mentioned above, the more we research mushrooms, the more we’re impressed. They simply contain too many beneficial compounds that we don’t get in the standard Western diet, and if you’re not going to eat a mix of mushrooms, supplementing them should be considered.

It’s of course worth mentioning that metabolic health is one of the keystones of proper immunity – vitamins and minerals are great, but if you’re still completely insulin resistant and toxic with industrial oils and refined sugars at this point, you’ve missed the point. Now more than ever is a time to get away from seed oil and empty carbs, moving to a nutrient dense diet.

In the case of metabolic support, most know about Alphamine capsules and Alphamine energy powder, but one highly underrated supplement to consider is LipoVate, which can improve several metabolic parameters along with that clean diet.

PEScience has done a great job of keeping their products simple, streamlines, and in as few capsules as possible. Immune-ST is another great one in the line of products.