In 2021, Performax Labs announced a rebrand, and hasn’t disappointed this far. While many brands weaken their formulas due to cost or “mainstreamization”, Performax Lbas decided to stay true to their brand, by keeping it aggressive.

They blew the doors down with an all new version of their stim-based pre workout, HyperMax Extreme, and have now released the stimulant-free pumped-up counterpart, VasoMax.

A serious upgrade for a serious pump supplement (VasoMax) 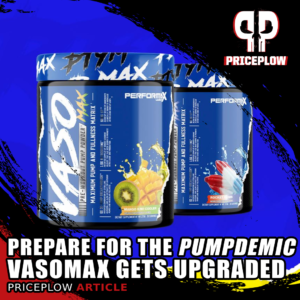 Prepare for the 2021 PUMPDEMIC! Performax Labs has upgraded VasoMax, and with a fully-dosed blend of both 3DPUMP and Nitrosigine, this one’s going to blow the doors off the gym

Performax Labs has taken this rebrand very seriously, and are doubling down on the 3DPUMP Breakthrough experience. Not only that, but they’ve loaded in a full clinical dose of Nitrosigine, making for a one-two punch that’s going to impress even the most “pump-challenged” individuals.

In this article, we detail the new VasoMax upgrades, and have also learned more about a key component in 3DPUMP, expanding on our earlier research of the ingredient.

It’s all below — this is one you won’t want to miss — but first, take a moment to sign up for PricePlow’s Performax Labs news alerts and check out our coupon-driven prices:

Each two-scoop serving will have the following ingredients and doses:

The 2021 launch kicked off with Mango Kiwi Cooler and Rocket Bomb, in 20 serving tubs (40 scoops total in the tub). You can see all of the available flavors below, but if you see Orange Mango or Raspberry Lemonade flavors, note that they are for the older formula: 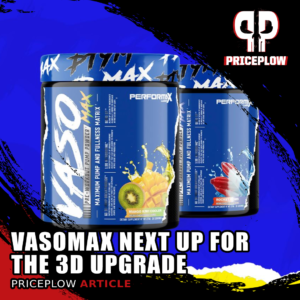 Our previous image before we knew how insane this one would be!

It’s a Pumpdemic! Vaso to the Max

We’ve long loved Performax Labs, who’s always pushed things to the max. The recent release of HyperMax 3D Extreme demonstrated that, but guess what would max things out even more? That’s right — stacking that with the new VasoMax. We’re learning more about the 3DPUMP Breakthrough, especially on the Amla side, and are confident that combining it with a clinical dose of Nitrosigine is going to work wonders.

The 2021 rebrand of Performax Labs has hit every note we’ve appreciated. This brand is strong, edgy, and aggressive, and they’re keeping it that way. They know that, we know that, and now you know that.

Whether you stack it with HyperMax or not, it doesn’t totally matter, because either way, VasoMax is going to pump you up to the max.

Note: This article was originally published on October 11, 2017, and updated on October 7, 2021 with the new formula.