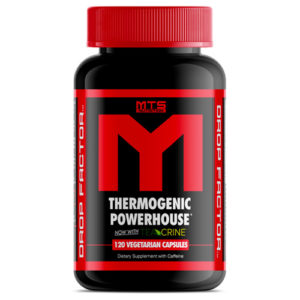 Note: This post was updated 12/14/2016 to reflect the updated formula of Drop Factor: TeaCrine was added and the SyneLean Blend was removed.

For quite a while now, we’ve recommended Marc “The Machine” Lobliner’s Drop Factor as a Top Fat Burner. It’s now in its third version and still going strong.

The second version came after the FDA sent out methylsynephrine warning letters, so that ingredient was removed. Fear not, MTS did not receive one of those warning letters from the FDA either, so they’ve been in the clear, and we have no reason to believe the OG formula was dangerous.

Now for the third version, even more long-lasting energy has been added, thanks to the introduction of a serious dose of Theacrine, which will replace the synephrine situation altogether.

This brings some greater changes to Drop Factor – version 3 should feel far different (and better!) than version 2. To us, when using theacrine, it’s all about dosage — and Lobliner didn’t cheap out with this one.

You can read about the rest of the label below, but first, make sure to take a second to check the best price and sign up for PricePlow alerts:

Note: In the price comparisons above, there’s no way to tell what’s the new formula and what’s old. You’ll need to check each store’s label for methylsynephrine (v1) or synephrine (v2) or theacrine (v3)… and if you want the older ones, stock up now!! 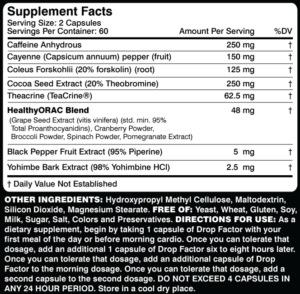 Not much has changed with the new formula for Drop Factor, and that’s a GREAT thing!

As we mentioned up top, users will still experience all the great effects of Drop Factor but with a longer-lasting rush. The rest of the players are still here with the addition of TeaCrine, and in their same amounts from the OG version to help you get lean and mean just in time for beach season.

Note: Ingredient amounts shown below are based on ONE serving (ie 2 capsules).

Synephrine is gone… did we lose metabolic benefits?

The biggest question mark is whether Drop Factor actually lost some fat burning effectiveness in version 3. The synephrine in versions 1 and 2 have research regarding metabolic enhancement (50mg p-synephrine increased caloric expenditure by 65kcals over 75 minutes in resting subjects).[21] Unfortunately, the same can’t (yet) be said of theacrine — at least in terms of body composition, where one safety study noticed no changes.[22]

Of course, those aren’t apple-to-apple comparisons, so we’d love to see how theacrine operates on the metabolism and if this dose can increase caloric expenditure as well. But for now, MTS has removed a known metabolic booster and one with unknown weight loss properties.

We asked Marc about the above concerns, and here was his comment:

I always thought the metabolic increase from synephrine was overstated. The benefits of Coleus and the boost from Theobromine and Cayenne alongside the benefits from the ORAC blend get the metabolism revving. And I theorize that since caffeine is a metabolic driver, by Teacrine potentiating caffeine’s effects, it will lead to a better overall caloric expenditure than before.

And it is less about transient burn to me than it is about optimizing fat loss and preventing plateaus, which all of these ingredients help you with.

So while Drop Factor will definitely feel better with this dose of Theacrine, you have to consider Marc’s comments above, and where you land on the synephrine argument. If you do like synephrine a lot, you better stock up on v1 and v2 of Drop Factor before it’s too late, but we have to thank Marc for the incredibly professional and refreshing comment here!

Does the person who formulates your fat burner look like this?! Click the image to see all MTS Nutrition Supplements.

Just like with the award-winning MTS Whey, the OG version of Drop Factor was great, and MTS Nutrition knew they had a winner on their hands. So, why mess with a good thing?

They didn’t, with the lone exception of removing the SyneLean Blend for the much smoother and longer-lasting energy source of TeaCrine.

The next evolution of Drop Factor is here, and when you’re ready to get slim and trim for summer, there’s no better place to start than right here.