Posted on September 8, 2016 by Mike Roberto | No Comments 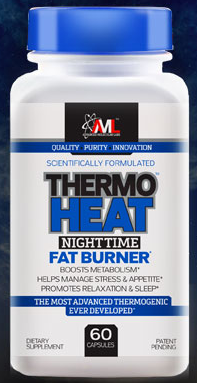 AML Thermo Heat Nighttime is a one of a kind stimulant free nighttime fat burner that sheds fat and helps improve sleep.

After stumbling across Advanced Molecular Labs, we’ve really become intrigued by a number of their intelligently assembled supplements. We’ve previously gone into great detail about AML’s Pre Workout which is a true strength and power-based performance pre workout. Today, we take a look at the brand’s advanced night time fat burner.

The quick review is that this is the most effective nighttime fat burner we’ve tried, although we’ve only tried two, and is definitely worth a look. A more thorough review is after our ingredient discussion.

You can see the label down below, but first, take a moment to check the best deal and sign up for PricePlow alerts:

As we stated up top, Thermo Heat Nighttime is a truly one of a kind fat burner that looks to amp up your body’s natural fat burning processes overnight while simultaneously improving your quality of sleep. Ultimately, you should wake up feeling noticeably leaner and better rested than with any other nighttime thermogenic you’ve tried before.

Take 2 Thermo Heat Nighttime capsules 30 minutes before evening meal or before bedtime. Do not consume more than 2 capsules daily.

One of the reasons why I like staying in the 12-15% bodyfat range is because I can really test and tweak different diet tactics and fat burners and see the difference, while not being too much of a maniac on the diet. And if I need to get to 10%, it’s only a few weeks away. 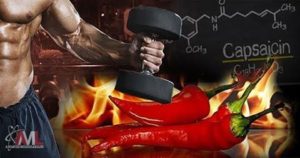 Capsaicin is just one of the many proven stim-free thermogenic agents in Thermo Heat Nighttime.

Thermo Heat Nighttime is one of those products that legitimately, visibly works. Even though I always wake up lighter than when I fell asleep — especially after hitting the restroom when I get up — this product is special. Every time I remember to take it, I wake up more refreshed but also a bit ‘tighter’ than normal. It’s impressive.

I almost always sleep better on it too… except once: one night, out of the 15 or so times I’ve used this, I didn’t fully swallow the capsule. It must have gotten stuck in my throat or upper digestive tract. And once that capsule opened up, the ginger and other ingredients gave me heartburn that you would not believe.

So while it’s not stimulatory, this stuff is extremely potent — but swallow that pill all the way!!

Granted, I’ve only seriously tried two nighttime fat burners, the other being Magnum’s After Burner. I found Thermo Heat Nighttime to be more effective, while After Burner’s hops did make me sleep a bit deeper. Thermo Heat’s GABA and 5-HTP has been nice on the sleep front though – this is my first time taking 5-HTP before bed (I usually don’t have sleep problems) and it seems to kick things to the next gear.

I have a feeling women would love this. Noticeably waking up tighter is great, and the non-stimulatory, all natural ingredients has a great spin to it too. But if you’re obese, I’m not sure you’ll “notice” the changes like I do, but I do believe that it really works.

The biggest challenge is remembering to take it before bed. You need to remember to make it part of your routine, and I keep failing at that.

Other Thermo Heat Supplements from AML 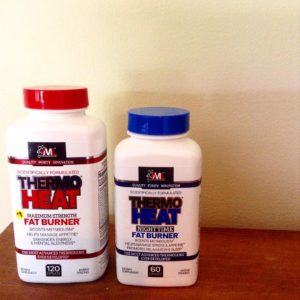 Thermo Heat comes in a day time and nightime formula so you can be a fat burning machine 24/7.

As mentioned in the Ginger section above, there’s also the stimulant-based Thermo Heat fat burner and the Thermo Heat Multivitamin. These also have the thermogenic portion that the Nighttime product here has — the multivitamin’s thermo dosage is likely smaller than the actual fat burner’s — so if you want to try the cayenne / ginger “brown fat” combo out, then consider those as well.

Fat burners are typically used only during the day time, but that’s leaving a good 8-10 hours each day that you’re not getting the maximum benefits from this type of supplement due to the requirements of sleep. However, consuming a fat burner that’s specifically formulated to take advantage of the inherent fat burning and muscle growing hormonal actions enables you to be a fat shredding machine 24/7.

If you don’t sleep as deep as you want, or you think you could benefit from the brown fat activating ingredients like this strong dose of ginger, then this could hit the other end of your fat burning schedule that you’ve been ignoring.

AML’s Thermo-Heat Nighttime is the perfect PM counterpart to your favorite fat burner or the daytime Thermo Heat fat burner that you typically consume starting in the morning. If you’re anything like us, you’ll ultimately wake up more well rested and sporting a slimmer physique come morning time. Just don’t forget to take it!