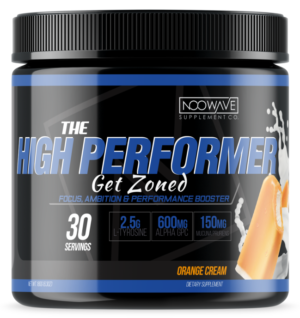 NooWave Supplements has reformulated their headlining productivity nootropic supplement The High Performer to make it even better than before, and now in a powder!

With all the intense work we do, we’ve been on a big kick with brain boosting supplements – otherwise known as nootropics. We’ve covered the gamut from workout enhancers to gaming supplements to standalone ingredient research, with all kinds of products in between.

It started with The Socialite

One company that we covered quite a while ago (they were well ahead of the curve!), but haven’t discussed recently has popped back up on our radar after they upgraded one of their premier nootropic formulas. That company we’re talking about is none other than NooWave Supplements, where we first wrote about The Socialite, a unique mental productivity supplement that helps one attack socially anxious situations in order to comfortably blossom into a social butterfly.

After that initial expose’, we dug into NooWave’s extensive line of supplements and couldn’t believe the wide array of products they’re offering — under everyone’s radar nonetheless. They literally have every aspect of mental enhancement covered.

Are you a High Performer?

So let’s go all out and look at their flagship nootropic, titled High Performer, a powdered nootropic drink. It’s a rather impressive cognitive enhancing stack designed to supply the user with everything needed to accelerate in the business world or classroom setting. The original version was a world-beater in its own right, but as we mentioned above, the brand has revamped the formula for 2018 to give it some extra juice.

Be forewarned, this is a mighty potent blend of nootropics and will unleash a level of discipline, focus and motivation that should only be saved for the most dire of circumstances.

The breakdown is just ahead, but before we get there, take a moment to check the best deal and sign up for alerts from PricePlow:

As we’ve seen with NooWave’s supplements so far, High Performer is an incredibly-well dosed, and touts a transparent label. If you really are looking to enhance all aspects of mental performance, it really won’t get much better than what you’re about to lay your eyes on…

Note: There have been some MASSIVE changes to the High Performer. Key changes include swapping in L-Tyrosine for NALT, removing sulbutiamine, synephrine, hordenine, noopept, and vinpocetine, as well as lowering the dose of L-Theanine.

Seriously — did they leave anything out? As you can tell, that’s a lot of incredible stuff, and the price is going to come up along with it. There’s a reason why this had to get converted into a powder – which is fine for us since we personally like to drink our focus! 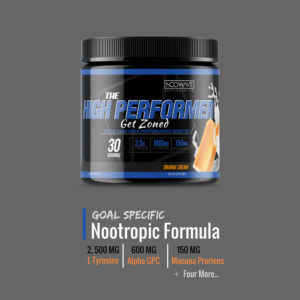 It’s time to get zoned with The High Performer from NooWave Supplement Co.

Another huge change for High Performer comes in the change from a capsule based delivery system to a powder one. Removing a bunch of the hard to flavor stims and nootropics (like sulbutiamine) enabled NooWave to make the switch to a powder.

There’s currently only one flavor available — orange cream — but we do expect to see another flavor or two roll out during the year.

Ready to be a High Performer?

If you want a rock-star nootropic drink mix with nothing overly questionable inside, this is it.

As you can see, High Performer is indeed a mighty powerful blend of nootropics that will keep you on point during the most trying crunch times you’ll encounter, like FINALS week!

You’ll be welcomed with a renewed sense of drive and motivation that you wouldn’t have experienced before and High Performer will make you that much more productive. Take it for a ride yourself the next time times are tough and there seems to be no end in sight to the work.