SWFT Stims is a fairly new company that started in 2017, but looking at their products, you can tell their team has some serious experience. SWFT has several industry veterans that have worked for other well-known brands, but wanted to branch off and create something really unique, thus SWFT was born! They’re selling products in multiple countries and getting rave reviews from people all over the world.

After trying this product, we can see why.

SWFT does things differently, but they also do things right. By focusing on the customer first, only using the highest quality ingredients, and creating custom flavors, the brand quickly gained popularity. They understand you have plenty to worry about when trying to reach your health and fitness goals, like getting enough sleep, hitting the gym, and maintaining a healthy diet. SWFT wanted to take the guesswork out of supplements and only give you the best ingredients on the market. 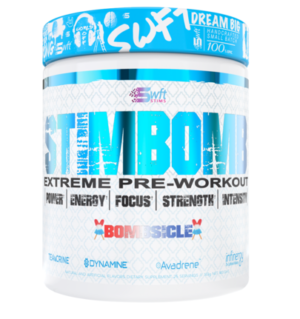 There are several unique things about SWFT, but one that really stands out is that they utilize a manufacturing process called micro batching, which means they produce every product in small quantities to ensure better control and quality (this also seems to allow them to make more flavors!). SWFT focuses on the fine details to make sure every product lives up to their standards. One supplement that really showcases this is none other than their explosive pre workout Stim BOMB. This product is appropriately named, because it delivers high energy that lasts far beyond your workout.

In this post, we’re going to dive into all the ingredients that give Stim BOMB it’s name, and how SWFT takes an innovative approach to producing supplements. Before we get to it, make sure you’re subscribed to PricePlow, where you can get some of the best supplement deals, news, reviews, and interviews out there!

Get ready for intense energy that will help you crush the most grueling workout! SWFT is not skimping out on any stims in this product! However, there are not many ingredients for getting a pump, but you can always stack it with Vasix or SWFT Pump to get the best of both worlds! This pre workout is powerful, so we strongly recommend starting with ½ serving to assess your tolerance – that’s probably all you’ll need! 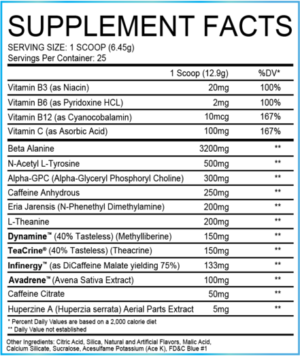 You can see why this product is called Stim BOMB!

Here’s what one full serving (8.2g) of Stim BOMB delivers, but first things first, note that there is a total of 400 mg caffeine:

SWFT Stim is known for creating some very unique and delicious flavors. They pride themselves on making custom flavors no other company can ever replicate. Every flavor is made in house by a scientist, and some take months to perfect. However, just take one sip and you’ll see why people claim that SWFT has some of the best flavors in the industry.

Below you’ll find an updated list of all Stim BOMB’s flavors: 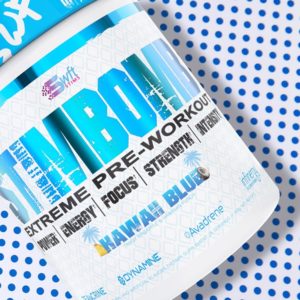 Stim BOMB Lives Up To Its Name

After reading about the formula, you can see why this product was named Stim BOMB. This pre workout is absolutely loaded with several ingredients that increase focus, energy, endurance, and power output. It will get you hyped up to crush a cardio or weightlifting session, while making sure you don’t crash afterwards.

SWFT is really making a name for themselves by coming out with great tasting and effective products. They really go above and beyond to create the best supplements for the consumer. As we mentioned, although they’re a newer company, there are several industry veterans involved that know exactly what ingredients are effective and at what dose. Stim BOMB is just one product that showcases what SWFT is capable of, they have several others that get rave reviews as well.

SWFT has big things planned for this year, like adding additional products, flavors, and more. PricePlow is excited to start reviewing more products, spreading the news, and giving you the best deals on all SWFT has to offer!