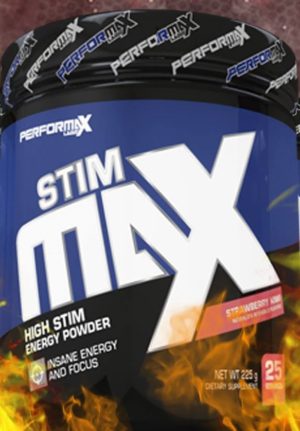 Performax Labs is taking pre workout stimulants to the MAX with StimMax, including a whopping 423mg caffeine along with Dynamine and nootropics.

The maximum-powered supplement experts went through a major rebrand in 2017, upgrading several of their products along with their look. This includes the fully-loaded pre workout supplement in HyperMax alongside our top-rated nootropic focus pill, NootropiMax.

More recently, they hit the powdered fat-burner market with FitMax, a serious combination of stim- and stim-free fat loss agents.

So with an incredible lineup of workout, focus, and weight loss products, what on earth could they possibly add?

Stimulants… and LOTS of them!

And this one’s got Dynamine, alongside about 423mg caffeine!!

StimMax is the newest pre workout supplement from Performax Labs, made for the stimulant fiends out there who don’t need their pre to be decked out for max-strength training. If you need tons of energy and focus and are looking for something different, then that’s what StimMax is about to bring you!

The label has officially leaked, so we dive in below, but before we get there, make sure to sign up for alerts so you know when StimMax hits the shelves:

Performax Labs has its sights set on StimMax being THE answer in the industry when looking for raw, unadulterated energy and focus. Wielding a powerful 423mg caffeine per serving, along with a host of nootropics, feel-good ingredients, and the newest cognitive booster in Dynamine, StimMax is a must try for all high-energy supplement enthusiasts.

“StimMax is being created to offer a solid option to all the high stim users. While HyperMax is a complete pre workout there is a crowd of users that want the strongest stim product available, and with [other stimulants] being removed from the market, we wanted to be able to provide these users with a competitive option.

Users can expect extreme energy, nootropic-based focus and great mood enhancement. While the product will be extremely strong it will also be very clean and enjoyable with limited side effects, such as jitters or cold sweats!”

StimMax will be available in Raspberry Lemonade to launch and will soon be followed with a Strawberry Kiwi flavor.

Performax Labs isn’t known for the best flavors in town, and with this kind of stim profile, we’re not expecting it to get perfect 10s in this department… and quite honestly, we don’t care one bit. As long as we can get this stuff down and don’t not look forward to drinking it, we can almost guarantee we’re going to love it til the very end.

Needless to say, it’s best if you use a food scale with this one, and start with half of a scoop. As mentioned above, don’t mix with any other stimulant-containing products or beverages!

Need to Get Stimmed to the Max? Full Scoop It!

Click the image to see all of Performax Labs’ well-formulated products. This is a brand with brains, and that’s why we love them.

Make no mistake when everyone tries StimMax, it’s going to cause quite the ruckus. A potent combination of hard-hitting stimulants and well-dosed nootropics makes StimMax one energy and focus pre workout that will be “must see TV.”

Now that we know the whole formula, we can agree that Performax Labs wasn’t bluffing with this product, and they sure as shit didn’t let a good name like “StimMax” go to waste!

Now make sure to sign up below for PricePlow alerts so you can make a professional-wrestling-CEO-style entrance every time you walk into anywhere!

You can compare what we’ve got above to what’s available at PerformaxLabs.com.