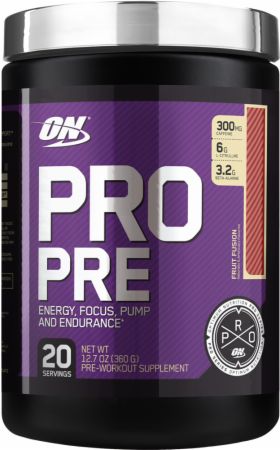 Optimum Nutrition is finally getting serious about its pre workout game with the release of the clinically-dosed Pro Pre.

While the pre workout market has been over-saturated with a slew of top pre workouts, there’s been a few huge companies missing a fully-loaded, clinically-dosed pre workout. Well, one of the biggest names in the business can now consider themselves back in the hunt for best pre workout available in Optimum Nutrition.

ON recently unveiled their newest pre workout — Pro Pre — which looks to deliver the goods, in full force, to its droves of fans around the globe.

Finally, a Pre Workout Optimum Nutrition can be proud of

This has been a long time coming – the brand that’s well-known for basic products like ON 100% Whey Protein Gold Standard has struck out a couple of times on the pre workout front. ON’s Gold Standard Pre Workout was a bit too much money for being a two-scooper, and we aren’t even sure what was going on with Platinum PRE-, which tasted like hot sauce thanks to its hot pepper extract.

So is the third round the charm? Looks like it just could be!

All the details are just ahead, but first, take a moment to check the best deal and sign up for alerts from PricePlow:

Optimum has certainly stepped up their pre workout game in Pro Pre. The product is bringing it all — pumps, energy, focus, and endurance. Unlike the Gold Standard Pre Workout, there’s no need to 2-scoop this product either, as it’s packing 300mg caffeine per scoop, a perfect amount to get anyone motivated heading into a grueling workout.

Optimum is launching Pro Pre with three flavors that are considered extremely safe, and in all likelihood, have the broadest appeal.

If the product is successful, we’ll probably eventually see more flavors, so sign up for alerts on this one below and we’ll notify you when we find better deals and newer flavors.

Here’s what you can expect from every scoop of the new ON Pro Pre. Compare prices on all Optimum Nutrition supplements with PricePlow!

All we can say is… it’s about time these globally known companies started stepping up their pre workout game to match that of the small and medium-sized brands that have been dominating the pre workout landscape the past few years. Dymatize Pre W.O. was a fantastic release from a major competitor, so it was time for Optimum to respond in kind.

ON Pro Pre is a well-rounded formula that should land well with the masses, but as with everything, it boils down to how well it’s marketed and priced. We’re interested in the combination of Ashwagandha, Rhodiola, and NeuroFactor. This one should feel pretty special.