Things have been crazy over at Olympus Labs in the fall of 2018!

Their recent launches of Superior Protein, the BloodShr3d Black Magic thermogenic fat burning powder, and estrogen-fighting Elim1nate have all brought interesting new ingredients to the market. 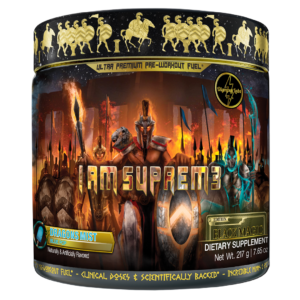 Were you a huge fan of RE1GN? Then we’ll save you some time: Olympus Labs I Am Suprem3 Black Magic edition is the same formula, only renamed and with improved flavor! But if you’ve never seen Re1gn, then buckle up, this formula is intense!

Today’s launch is a little bit different, because I Am Suprem3 Black Magic Edition is the same formula as the original Re1gn pre workout, just with a new name.

While Re1gn tubs will still be around for a while, the brand is using the name change to differentiate its products and versions:

In this article, we are going to talk about I Am Suprem3 Black Magic Edition, but it’s really the same story as Re1gn — a crazy powerful pre workout (but with improved flavors here) that warrants an important disclaimer:

This pre workout does not contain yohimbe/yohimbine, but if you are sensitive to those ingredients then it’s recommended you start at a *very* light dose to assess strength. The Stimulant-X ingredient contains alkaloids similar to those from the yohimbe family.

With that disclaimed, let’s get ready to dive into one of the most hardcore formulas on the market, but first, let’s check prices and let you sign up for Olympus Labs news alerts:

Let’s start this off right… it tastes way better than Re1gn too:

I Am Suprem3 Black Magic Ingredients

Note: The following doses come in two scoops. One scoop is suggested for beginners to assess tolerance.

Same great formula, but now those new ingredients have been proven in a big way! But with that goes the same question – what are we really getting out of Stimulant-X here?!

Leave it to Olympus Labs to get creative with the flavor names, something they started with Re1gn as well (at least this time they tell us what to expect):

Not sure how sour to expect Dragon’s Mist to be, but when Olympus Labs does sour, they do it in a big way. Just watch the beginning of my review of BloodShr3d Black Magic, where I take down the Sucker Punch flavor. The DemiGods don’t mess around with flavor systems anymore!!

If you want an aggressive pre workout, this is about is intense as things are going to get right now. Re1gn was an epic launch that was a wild, wild ride for those who are Y-sensitive, so now that we have that disclaimer, we’re happy to recommend it to the right people – those who want to go all out and can handle everything listed above.

If it’s a bit too much or you’re in a country where you can’t get it, then you can check out our Olympus Labs page as there will be more news coming for you.

And if you miss the old flavors, see our original Re1gn post, which has those price comparisons. Otherwise, check out I Am Suprem3 Black Magic below and sign up for Olympus Labs news alerts, because this brand is busy: