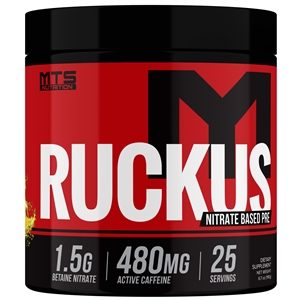 Marc Lobliner and MTS Nutrition have revamped their high stim pre workout Ruckus with even more caffeine, focus, and pumps.

Marc “The Machine” Lobliner is certainly living up to his name.

He and MTS Nutrition haven’t shown one inkling of slowing down. Over the past few years, the brand has been steadily releasing new and intriguing formulas as well as revamping some of their older, more popular products, as we’ve recently seen with MTS Clash. Well, the crew at MTS is back at it again, this time taking their tinkering to the brand’s best-selling high stim pre workout MTS Ruckus.

We’ve got all the details ahead on the new even higher powered formula, but first, take a moment to check the best deal and sign up for alerts from PricePlow:

This one is now nearly in our Best Pre Workout Buyer’s Guide, so check it out to see if it’s for you!

The 2017 edition of Ruckus isn’t all that different from the original version released almost two years ago. Most notably, the brand completely revamped its caffeine delivery system, shifting from solely using infinergy to a combination of Infinergy, caffeine anhydrous, and a new sustained-released form of caffeine called VitaShure.

Overall, this yields a total of 480mg caffeine!

Second, MTS has replaced N-Acetyl L-Tyrosine for pure L-Tyrosine, something we’re in favor of. Let’s see what Marc’s got in store:

On the New Formula

We reached out to the Machine himself for comment on what was the intention behind the new formula and what he expects from it:

”The original RUCKUS hit, but we wanted it to hit ALL WORKOUT LONG! The simple yet brilliant combination of varied-release points with pure caffeine, Infinergy for its sustained release and Vitashure, a novel, encapsulated caffeine allows for the burst to sustain through the longest, most intense workouts. Alongside the other energy and focus amplifying compounds, including Theobromine for its sustained sensation and vasodilation effect….RUCKUS is clearly the new leader in hard-hittin, vein-popping preworkouts.” 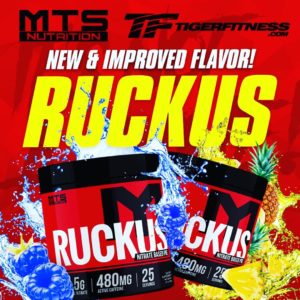 Not only is the profile updated, MTS fans will also get two new flavors in Blue Raspberry and Pineapple.

The new version of Ruckus won’t feature the extensive five flavor lineup of its original debut, but it will launch with at least two flavor options in blue raspberry and pineapple. Hopefully, as the new product continues to take off, we’ll see more flavors roll out in the coming months.

MTS Ruckus boasts an impressive profile of ingredients that should deliver everything you need for long lasting energy in your workout. There’s no question that we’re salivating over getting the betaine nitrate pumps back. That alone is going to make this worth a try for anyone who hasn’t had this.

On top of that, the revamped energy profile gives this product immediate “get up and go” energy to match its prolonged energy high. This is a must-try pre workout for the high stim / high caffeine crowd out there.

Make sure to stay tuned to PricePlow (Facebook, Twitter, or sign up for hot Supplement Deal Alerts) for any updates! You can also sign up below for updates and where to get the best deal on all MTS Nutrition supplements!