Jacked Factory impressed us in 2015, and still impresses us to this day!

We’ve been following Jacked Factory for quite a while now, taking note when they stunned the Amazon market with their Altius Pre Workout six years ago. It may not seem like a huge deal now, but at the time of its launch, there were practically no efficaciously-dosed non-proprietary pre workout supplements, and the few that were there were not naturally colored and sweetened like Altius.

Jacked Factory has become a brand that we look to with consistent labels, branding, and formulas that keep things modern, but don’t shy too far away from tried-and-true classic ingredients known to work with little fanfare needed.

Want to become a Jacked Factory? Then assert your dominance over carbohydrates 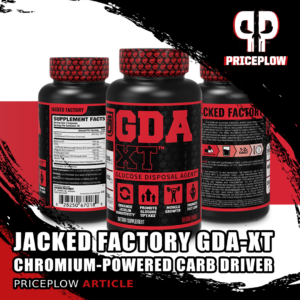 Need to drive your carbs to where they belong (in muscle tissue)? Then GDA-XT brings a unique batch of ingredients led by Chromax chromium picolinate!

One of the consistent components of getting jacked is control over carbohydrates: athletes need to use the right amount to make strength, performance, and size gains, but not so much that they chronically stop fat oxidation. But even more important is getting those carbs to where you want them to go — muscle tissue!

The best way to do this, along with your epic workouts, is to remain insulin sensitive – and there are dietary ingredients that promote this state. They’re in a class we call glucose disposal agents, and they help your body shuttle blood sugars to muscle cells rather than fat cells (or worse, in the bloodstream for too long).

With tried-and-true ingredients like Chromax chromium picolinate and berberine paired with an incredible support cast amplified by AstraGin, GDA-XT is a glucose disposal agent that can be counted on each and every time you carb up.

The whole analysis is below, but first, sign up for our Jacked Factory news and deal alerts since the brand is always up to something good, and has been since that OG Altius launch:

The following ingredients are in each two capsule serving, and there are 30 total servings in the container. Jacked Factory recommends taking two capsules 10-15 minutes before a high-carb meal, up to twice daily.

GDA-XT is a solid formulation that takes some classic ingredients with some new ones, and puts together a formula made for carb-lovers who train. We see too many GDAs that don’t bring the chromium (especially the chromium picolinate), and will continually argue that our processed food supply has been so over-farmed that we’re missing critical nutrients and minerals like it.

Get your glucose support on with GDA-XT

But if we’re training hard, even if we’re eating a lot, we might not be getting the nutrient density we need, and supplements like GDA-XT can help drive those carbs home.

We’ve always been fans of Jacked Factory, and see the similarities between a classic supplement like Altius and a classic ingredient like Chromax. It worked great back then, and it still works great now. The younger competition is merely just taking their time to figure out what Jacked Factory already knew.