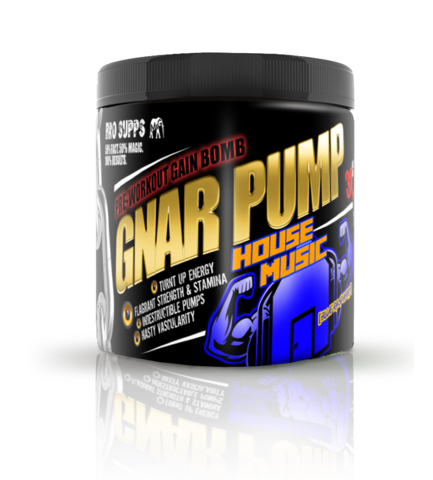 Gnar Pump is the comical pre workout from the Brofessor Dom Mazetti and his supplement company BroSupps.

The big boys of the supplement world have been dominating the headlines lately with lots of new pre workouts, intra workouts, and fat burners. We thought we’d set aside a little time today for one of the “little guys” who isn’t so little anymore!

BroSupps is the company headed by the internet’s most famous Brofessor Dom Mazetti. Fans of Dom love his light-hearted take on fitness as well as his wildly popular “Do You Even Lift?” video, as well as any of his comical videos that always find a way to make fun of CrossFit.

A while back, Dom released his very own pre workout, Gnar Pump, intended to deliver the ultimate workout experience in energy and performance. But does it?

We’ll reveal the gnarly label below, but first take a second to sign up for price drop alerts and check the best deal in case it is in hot deal mode:

Will it end up somewhere on our best pre workout supplement list? Well, unless we make a new section for funniest pre workout, the chances are slim.

Gnar Pump employs a mostly open label and contains many of the ingredients we like to see in a pre workout that have actually been proven to work:

While we all love the great videos by the great Brofessor Dom Mazetti, we’re not entirely thrilled with this pre workout. Yes, it contains a lot of the ingredients we want to see in a pre workout, BUT the doses used here are laughable for several of the ingredients. Even at two doses, you’re not even close to clinical doses – especially of the actual pump ingredients.

If you buy this, consider it a “charity buy”. But in all honesty, there’s pre workouts that are twice as good at less the price, so you’re better off just buying his shirts or dropping him some PayPal donations and leaving this out of your serious stash.

Feel free to keep enjoying the jokes and ensuing hilarity of Dom, but do yourself a favor and give this one a pass if you’re looking for a real pre workout that actually delivers pumps.