Long-time readers of this blog will definitely be familiar with Glaxon, a radical outfit of die-hard nutritional innovators who always send us something new.

Glaxon Slyce V2: Get ready for something new! 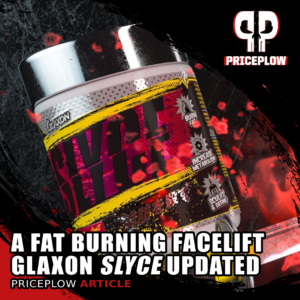 Glaxon Slyce has been updated in late 2021, and there are some monumentally unique ingredients!

Today we’re excited to announce that Glaxon is revamping their popular fat-burning supplement, Slyce. We’re comfortable calling this change a fairly dramatic one: a lot of mainstay fat-burning ingredients, such as green tea extract, are being eliminated, and some completely new and far-out ingredients have been added.

In this industry, it’s easy to feel like we’re dealing with the same formulas over and over again — not so with Glaxon. A few of the ingredients we’re covering today are ones we’d never even heard of before!

What we appreciate most about this supplement is not just that it’s innovative, but also that it’s smart. Glaxon really pulled out all the stops when they re-formulated this one, and came up with solutions to problems that most manufacturers never even think about.

The result is a versatile fat-burning supplement that will support you on a calorie cut, or maybe even just help recomposition. Let’s take a look at it, but first check the coupon-powered prices brought to you by PricePlow: 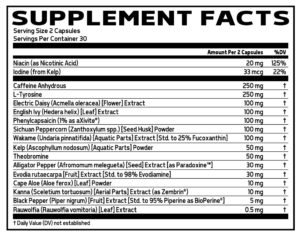 Get ready for something different — as always with Glaxon, there’s some unique new ingredients inside Slyce!

Here’s what you get in a single two capsule serving of Slyce V2 Stimulant Fat Burner from Glaxon:

If you’re tired of the same old run-of-the-mill fat burner products, and looking for something new, definitely do not sleep on Slyce V2 from Glaxon.

For those of you who are already loyal Glaxon customers, be aware that Slyce is intended to stack incredibly well with Glaxon’s previous releases Thermal, their non-stimulant fat-burner supplement, and Xerion, their nutrient-partitioning supplement that’s designed to help control blood glucose and insulin levels.

We do not recommend stacking Slyce with the Specimen pre-workout supplement from Glaxon, because that would give you a combined total of 550 milligrams of caffeine — way too much for the vast majority of people to take in a single serving. Instead, consider stacking Slyce with Glaxon’s non-stimulant pre-workouts, Plasm Caps (available in capsules) or Plasm Surge (available as a powder).

Now you are ready to Slyce the fat away!