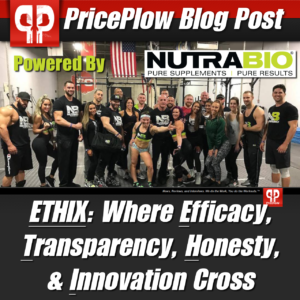 Powered by the team at NutraBio, ETHIX is a completely new brand that really stands for something!

After a monstrous first half of 2019, where NutraBio launched a new supplement or flavor every Friday for six months (see our NutraBio News Feed to see), Mark Glazier and his team are preparing to let loose the other project they’ve been working on: a new brand, with a whole new look!

Imagine the brains and morality behind NutraBio, coupled with a young and edgy new look that’s unafraid to use more hot and innovative ingredients. That’s what we’re imagining from the brand’s latest creation, ETHIX. ETHIX is actually a clever acronym:

Before getting into the details, you can sign up for our Ethix news alerts below, but note one thing: this is a retail store only brand, so we’ll have some news about their products, but you’ll have to go to the store to pick them up!

Mark Glazier told me that twelve products are initially slated, but the first three will be the following:

We expect to see much of the same cornerstone foundations from NutraBio, such as shared third-party lab testing and fully-disclosed labels, which you can learn about in our NutraBio Story article.

In terms of what’s not coming, Mark Glazier told us there won’t be any protein with this line — NutraBio’s got that well-covered with 100% Whey Protein Isolate, Classic Whey, Muscle Matrix, and more.

When can we expect ETHIX? 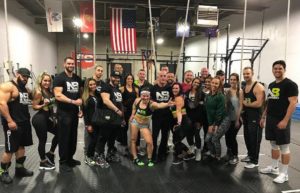 Team NutraBio is ready for the ETHIX launch

The launch will be sometime in the fall of 2019 – we’re thinking around the Olympia, but don’t hold us to that, as the Olympia is earlier in September this year and this one may go into October or so.

Prior to this year, we wouldn’t have known if NutraBio could handle such an ambitious project. But now that they’ve proven a new weekly release for an entire half year, they’re more than prepared for the ETHIX.

You can sign up for PricePlow’s ETHIX news alerts below on this page, but note that this is a retail-only brand, meant to pay it back to the retailers who have carried the industry so far. This means that PricePlow’s price alerts, coupons, and deal alerts won’t apply… so you’ll have to see it in real life for yourself!