5% Nutrition TEST Booster: Treat Yourself to Some Test

5% Nutrition TEST is a new natural testosterone booster that brings heavy, feel-good doses of Longjack and Shilajit, paired with added protection from fenugreek and DIM.

It’s 5% Nutrition Day (5/5 of 2022), and what better way to spend it than by releasing a natural testosterone-boosting supplement?! 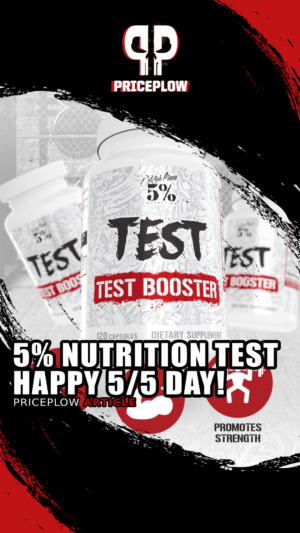 5% Nutrition TEST is here on 5% Nutrition Day, and it brings booming doses of Longjack and Shilajit

That’s exactly what 5% Nutrition has in store for you today:

5% Nutrition TEST: Hard and Heavy Doses of Longjack and Shilajit

We know what you’re thinking — Rich Piana definitely took far more than natural testosterone-boosting herbs and supplements. And that’s obviously true, as he documented on his own legendary YouTube channel.

But that doesn’t mean there’s nothing to some of these ingredients. Whether you’re a natty looking to put a bit more pep in your step, or you’re looking to keep things as “elevated” as possible in between cycles, 5% Nutrition Test has a solid formula for you here.

Led by two very-well dosed ingredients in Longjack and Shilajit (600 and 500 milligrams, respectively), we’re confident that this is going to give you some added confidence. Will it take free testosterone to the next galaxy? No. But should it give you a bit of a bump on an otherwise slow month? The data says yes.

In this article, we dig into the science behind the formula, but first, check PricePlow’s prices and deal alerts before we get started:

Each four capsule serving of 5% Nutrition Test includes the following:

Simply take all four capsules once a day, preferably with a meal. 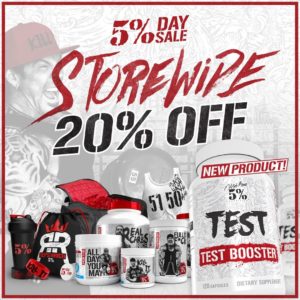 If you missed the last 5% Nutrition Day, mark your calendars for 5/5 on an annually repeating reminder!

If you’re into AM/PM dosing of your supplements, you can feel free to split this into two capsules each, but it’s not necessary.

Cycling here isn’t necessary, but in general, it’s wise to use natural testosterone boosters for 8 weeks on, followed by 4-8 weeks off.

Clearly, Rich Piana was taking more than just natural testosterone boosters. And so are many 5-Percenters. But that doesn’t mean there’s no point in taking hormone-optimizing supplements that can also play a role in testicular health, libido, and estrogen balance.

5% Nutrition Test relies heavily on two very large supplement doses – longjack and shilajit – and if you’ve never taken the two together, it’s a great time. We’re not promising supraphysiological gains here, but we are saying that there is some research behind this formula, and it can put a bit more pride in your stride.

This is also a decent formula to pair alongside Post Gear and your other post-cycle therapy drugs if you’re trying to do all that you can to keep the gains from your cycle. The combination here inside may surprise you… so here’s to getting your long jack back.