5% Nutrition D-Aspartic Acid: DAA and DIM for the Hormonal Win

Posted on February 6, 2022 by Mike Roberto and Nick Andrews | No Comments

Rich Piana was and still is an absolute legend in the bodybuilding world, and for good reason. He brought a “whatever it takes” attitude to everything he did – which got him world-class results in the gym. He brought this same relentless drive when he founded his supplement company, 5% Nutrition, and it’s a surprise to nobody that even in his absence, 5% has become a major player in the industry and continues turning out phenomenal products. 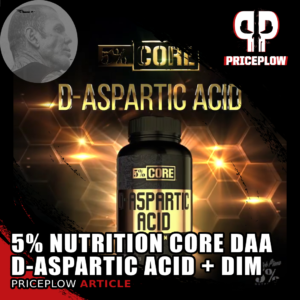 DAA Done Right — this time with some added DIM!

The 5% Core Line is a slight departure from the typical “core series” lineups you see in the supplement industry. Traditionally, these types of series have single-ingredient supplements designed to be combined with more complicated formulations. But the 5% Nutrition Core Line goes a little beyond this: 5% augments its primary ingredient with a couple worthy additions.

Our most well-researched D-Aspartic Acid article to date

But, as we’ll see, the benefits of the primary ingredient go beyond just testosterone boosting – and we’ll get into the stereochemistry of what makes it special. We’ve actually never dug this deep into DAA, so if you’re looking to learn, jump in and explore the mechanisms. But first, sign up for our 5% Nutrition news alerts, since we’re always covering Rich’s best and brightest:

In a single 5 capsule serving of D-Aspartic Acid from 5% Nutrition, you get the following: 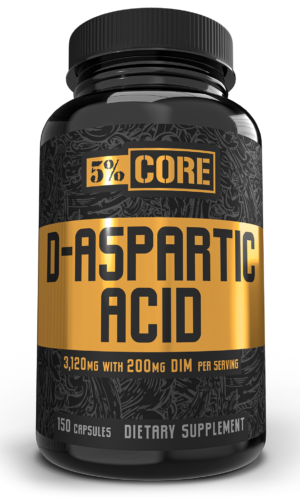 Take five capsules by mouth once daily with a meal. Take at the same time every day. If you’re on an AM/PM supplement schedule, you could consider splitting it into 3/2 capsules each, but that’s not necessary. Just stay consistent.

We like to see supplements that attack the same problem from multiple angles. In this case, we’re trying to make the body’s hormonal profile more androgenic, so it just makes sense to increase testosterone and decrease (and module) estrogen. This is especially true because if you’re dealing with aromatase overexpression, then any excess testosterone you produce will be converted to estrogen unless you’re taking something to keep estrogen under control. The generous dose of DIM in this supplement should do the trick quite nicely.

Whether you’re trying to correct an underlying hormonal or reproductive issue, or prevent one from developing, 5% Nutrition’s D-Aspartic Acid supplement is definitely worth your consideration – and don’t sleep on the cognitive benefits of taking this supplement, either.