SteelFit is a relatively “new” brand but we’ve known them in the business forever. So far their formulas are intense and we’re loving them! See all SteelFit products and news on PricePlow!

SteelFit has come out with some amazing products over the years, but they’re not stopping anytime soon. Early into the new year they launched a new flavor (Peanut Butter Milkshake) of their popular protein powder, Steel Whey, and they nailed that flavor. Shortly after its launch, they announced a brand new fat burner was on the way called Steel Slim! SteelFit already has a few powerful fat burners available including Shredded Steel and Steel Core (and let’s not forget the insanely heated Steel Sweat), however they are looking to expand the line and give their customers more options. Shredded Steel was awarded PricePlow’s Fat Burner of the Year for 2019, so you can tell SteelFIt knows how to formulate an epic weight loss product!

What Makes Steel Slim Different from the Others?

First off let’s explain briefly the key differences between each of SteelFit’s fat burners. Steel Core is a stimulant free fat burner which was formulated for both men and women, can be taken anytime during the day, and was designed to help convert fat to energy, enhance weight loss, improve metabolism, partition carbohydrates, and increase strength. 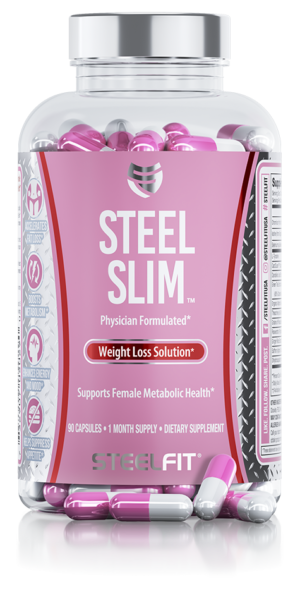 Don’t be fooled by the pink label, this fat burner packs a punch!

Shredded Steel is what they call their “extreme weight loss solution” and it’s formulated to amplify fat loss, suppress appetite, boost your metabolism, and increase energy/focus. Shredded Steel contains 150mg of caffeine per serving along with a serious 10mg dose of yohimbine and some other ingredients that have similar stimulatory effects such as TeaCrine. Therefore, Shredded Steel is best taken in the morning or pre workout but it’s best to avoid close to sleep.

Steel Slim: A fat burner for women to take with coffee or other energy

Steel Slim is a weight-loss product created specifically for women. It contains a multitude of very effective, efficaciously dosed ingredients supported by research, which is something PricePlow loves to see regardless of what the product is! One unique thing about this fat burner is that it’s not loaded with a bunch of stimulants like most others on the market. It actually contains no caffeine at all, but instead uses caffeine’s cousin TeaCrine, which gives you smooth, sustained energy with no jitters or crashes. Thus, we still don’t recommend taking this within 4 hours of bedtime. However, with virtually no stimulants you can still enjoy your morning coffee alongside Steel Slim without worrying if your caffeine intake is getting too high.

In this post we’re going to run through every ingredient to educate you on why it’s included and what benefits it will provide. SteelFit takes their time on each product to make sure the formula is as good as it can be, so we’re expecting Steel Slim to be another solid supplement!

As always, before we embark on this ingredient analysis, make sure you’re subscribed to SteelFit deals and alerts, so you can be the first to know when new products launch and get the best prices available! 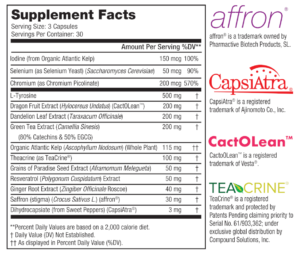 Steel Slim only includes ingredients that are efficaciously dosed and backed by research!

This fat burner is packed with everything you need to help lose weight faster and bust through any plateau you come across on your journey to a better body composition. Just one look at the label and you can tell Steel Slim was very meticulously formulated — not just filled with a bunch of stimulants that lead to jitters, anxiety, and the dreaded crash.

Although Steel Slim is packed with several ingredients, you only have to take 3 capsules and one bottle is an entire month’s supply. Let’s see exactly what a serving of Steel Slim contains to assist your fat loss goals:

After assessing this formula, we can tell this is going to be another effective weight loss support product from Steel Fit. As long as you are exercising appropriately and being conscious about your diet, Steel Slim will be a very good addition to help shed some more fat and improve your body composition. It is loaded with several ingredients that attack all the issues that come from dieting: appetite, decreased energy, slowed metabolism, and low mood. Steel Slim with help bust through your weight loss plateaus and leave you feeling motivated, energetic, and ready to continue. 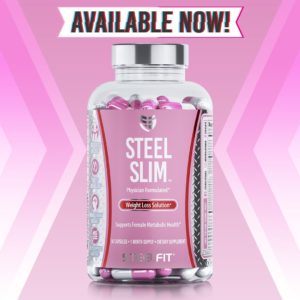 This fat burner is so well-formulated, the guys should be jealous!

We all know losing weight can be a battle for many, so Steel Slim is here to provide some assistance. As we mentioned, this is a fat burner geared towards females, so if you’re a male then we highly suggest Shredded Steel, but you could stack them together if you’re willing to deal with a monster dose of 200mg total theacrine! That product is also formulated to give you incredible results with a high voltage of yohimbine. Due to Shredded Steel’s low caffeine content, you can get even more intense with Steel Sweat, which has 100mg more and is great for the cardio burn “sweat amplification”.

Every year SteelFit comes out with excellent new products, flavors, and formulas, we’re excited to see what else is in store for the rest of the year! SteelFit has big aspirations for 2020 and beyond! PricePlow will be covering all the major products, news, and deals SteelFit has to offer so don’t miss out! 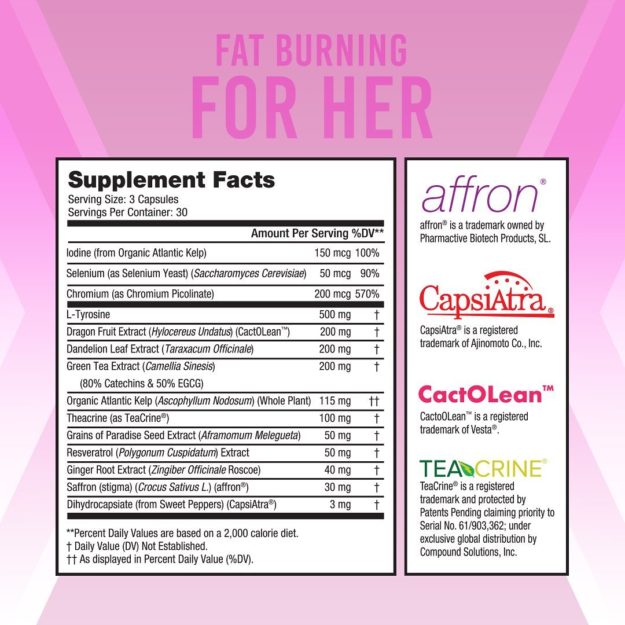 Fat Burning “for Her”… But men can definitely take this too!