SteelFit (@SteelFitUSA) has been on PricePlow’s radar, especially thanks to the thermogenic fat burner Shredded Steel, which we downright love. Run by a team of industry veterans, SteelFit is a relatively new company with a growing range of products, including everything from the aforementioned Shredded Steel fat burner to whey protein to fat burning gels… and now, a sleep support and recovery supplement. Today, it’s time to slip into Steel Dreams. 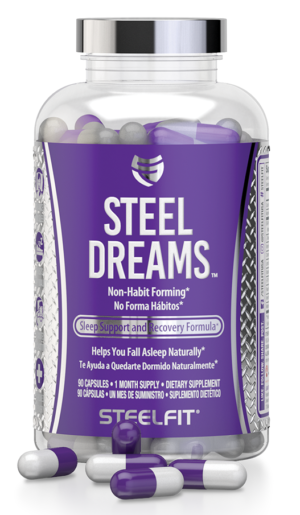 Are other one-dimensional sleep aids not cutting it for ya? Then SteelFit Steel Dreams is your next shot, with three angles from herbs, single-compound ingredients, and mineral support!

Sleep is one of the most important factors when it comes to making sure your hard work in the gym and the kitchen isn’t going to waste. The brain is restored and muscles are rebuilt while you sleep, so making sure your sleep cycle is in order will do wonders for your body and mind.

Steel Dreams is a sleep supplement that follows our preferred strategy when it comes to sleep aids. It combines three non-pharmaceutical worlds that have been shown to help sleep:

This hits the best of all worlds, providing both targeted and soothing benefits to improve time to sleep, sleep quality, and reduce anxiety and cortisol. Plus, there’s a new ingredient listed above that we’ve never covered!

We’ve got a breakdown of the Steel Dreams ingredient list below (and it’s clearly loaded), but before we dive in, check out PricePlow’s coupon-driven deals, and don’t forget to sign up for our SteelFit alerts since they’ve run a few great contests with us too!

SteelFit has combined several well-known and effective ingredients for the purpose of bringing you a better night’s rest. Improving sleep quality helps recovery from your workout sessions, and helps mental and physical performance the next day. In addition to assisting in having a restful and deep sleep, Steel Dreams also aims to relieve stress and take the load off your nervous system, a huge plus given that SteelFit is a diet-based company.

Listen to Mike’s explanation if you don’t want to read:

And now on to the research! The following ingredients come in the three capsule serving size:

Take three capsules before bed. You may wish to start with one or two capsules to assess strength and timing.

Conclusion: The Kitchen Sink and then some!

Wow! There aren’t many other supplemental angles to hit with this one – Steel Dreams covers literally every base you can imagine!

SteelFit is a relatively “new” brand but we’ve known them in the business forever. So far their formulas are intense and we’re loving them!

SteelFit clearly did their research when formulating this behemoth of a sleep-aid product. We see a wide variety of ingredients, from the tried and true, to the new and unique. While not everything is clinically-dosed, we’re not sure that even matters at this point. Just a few of these ingredients are probably enough, but this is taking the entire arsenal to the problem.

If you’re someone who has been struggling to get a good night’s rest, and other products just don’t seem to cut it, Steel Dreams may just be the answer you’re looking for. There’s not a whole lot missing, and that’s why you shouldn’t miss out.