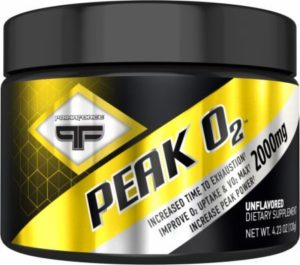 If you’ve spent much time following the PricePlow blog here, you know we’re always interested in the new up-and-coming ingredients helping to make athletes bigger, stronger and/or faster. This one could lead to performance-based gains, allowing you to train longer and harder while using less oxygen and energy up.

Previously, Xtend Perform was the only way to get it in, but thanks to Primaforce, Scivation’s sub-brand for raw material ingredients, you can try PeakO2 in a standalone bulk container and add it to your favorite pre workout or BCAA supplement, making for a convenient way to test the supplement your way.

We’ve got the full analysis down below, but first, take a moment to check the best deal and sign up for alerts from PricePlow: 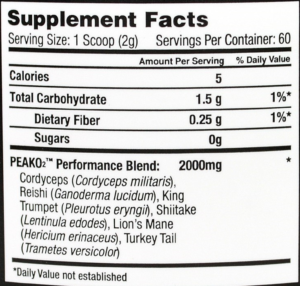 PeakO2 supplies you with everything you need to increase endurance and stamina, ultimately making you a better athlete.

However, PeakO2 is not just a single extract — it’s a patented and trademarked blend of several unique varieties of mushroom.

Leading off the blend is Cordyceps militaris, a truly radical variety of mushroom that’s loaded with all kinds of bio-active compounds. Cordyceps militaris has previously been researched for its anti-inflammatory, anti-oxidant, anti-aging, anti-fatigue, and pro-sexual benefits.[1,2] However, a new landmark study conducted in 2015 gives evidence that it may in fact also enhance athletic performance! 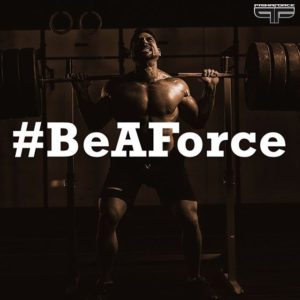 With PrimaForce PeakO2 in hand, you will be a foce to be reckoned with when you enter the gym.

Conducted at the University of North Carolina – Chapel Hill, researchers sought to determine the effects of PEAKO2 on aerobic power, time to exhaustion, and lactate levels during high-intensity exercise.[3] For three weeks, subjects consumed either 1.3 grams of mushroom blend or 1.3 grams placebo (composed of maltodextrin) 3 times per day, resulting in a total daily consumption of 4 grams.

At the conclusion of the three week trial, the group consuming PEAKO2 displayed significant increases in peak power output, VO2 Max, and time to exhaustion. Contrast that to the placebo group who showed little or no increases in performance parameters!

Two servings of Primaforce PeakO2 will give you the exact amount of used in the trial group, perfect for a pre workout serving and an intra or post workout serving!

A Bit More Info on Cordyceps

Cordyceps has always been one of those ingredients that’s piqued our curiosity. We first noticed when we checking out ONNIT, as they seemed to be pushing it for YEARS now. But, their hype seemed more based on theory than actual results. However, the recent UNC study gave us the first true human trial that gave us some hard evidence we felt comfortable and excited about.

Sure, we’ve read / heard about all the magic that is cordyceps sinensis, but it may not be the standout ingredient everyone first thought, especially given out inconsistent extracts of it are given the difficulty presented in cultivating the species.

With cordyceps militaris, though, we now have legitimate human research documenting it as a reproducible ingredient as well. We explain all of this in much greater detail in our investigative mega-post, Cordyceps Crackdown: A Hit-or-Miss MESS… Until Now!

But there’s more to Peak O2 than that…

The remaining ingredients in PeakO2’s blend are all mushrooms, so get ready to get up close and personal with lots of fungi!

Applied to your own standard supplementation regimen, you could consume your first serving of PeakO2 with your preferred pre workout, and then mix up your second serving with one of the top BCAA supplements we’ve discussed on the blog.

For non training days, simply mix a serving into your preferred energy drink or gaming supplement as you see fit.

And if you don’t want to deal with the mad-scientist action discussed above, you can always try Scivation Xtend Perform and be done with it.

Click the image to go to the best deal!

PeakO2 maximizes human power and endurance and can be incredibly beneficial for athletes of all types including bodybuilders, team-sport athletes, MMA fighters, and yes, even crossfitters.

Of all the new highly-touted “muscle builders” that come out each year, PeakO2 seems to be one of the few that has the bite to match its bark. It’s got the research documenting its success in human trials which goes a long way in our minds to proving its effectiveness. We’ve been loving it as part of Xtend Perform, and now that we are able to mix in into anything from pre workouts to even fat burners, or protein powders, makes it all the more versatile and easy to make sure we get our daily serving.

This is one ingredient you definitely need to try if you’re looking to up your stamina during your workouts and combat fatigue.

Note: PrimaForce is spelling it with a space, as Peak O2, but Compound Solutions officially spells it with no space. Just an FYI.