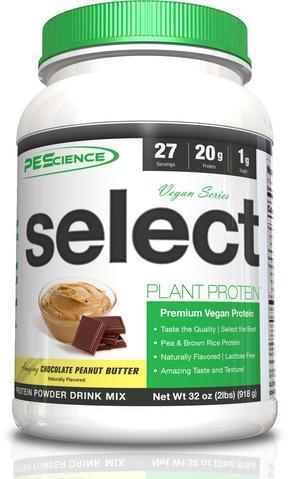 PEScience has been dropping new products and flavors left and right! They’ve been fairly quiet for the first part of 2020, but it turns out that PEScience was working hard behind the scenes this entire time. And now, they’re ready to show you what they’ve been up to! First, PEScience launched their Sour Green Apple and Tropical Twist flavors of Alphamine (“The athlete’s energy drink”)… but they didn’t stop there!

PricePlow had never seen a greens formula like that, where the brand openly talks about the types of processing. You can tell that PEScience highly values customer education along with creating formulas backed by research – it’s one of the reasons why PEScience stands out in the sports supplement industry!

Alongside the launch of PEScience Greens & Superfoods, they also surprised us by releasing a new flavor Select Vegan Protein!

That’s right, for all of you chocolate peanut butter cup lovers out there, PEScience now offers Select Vegan Protein in Chocolate Peanut Butter! And if there’s one thing that PEScience is known for, besides being on the forefront of scientific research, is delectable-tasting protein powders!

One of PEScience’s best selling flavors for their dairy-based protein powder, Select Protein, is Peanut Butter Cup, so it only makes sense to develop a similar flavor for Vegan Select Protein. There were probably several requests for this flavor and of course, PESciecne gave their customers what they wanted!

We have more information about PEScience Chocolate Peanut Butter Select Vegan Protein down below. But before getting into any more details, be sure to sign up for PEScience news and deal alerts to get notified when more flavors and products launch!

Vegan protein powders are typically a lot more challenging to flavor then other types of proteins because they’re naturally more gritty, bitter, and “earthy” tasting. But if anyone can make plants taste like a chocolate peanut butter cup, it’s the mastermind flavorists at PEScience, who were early to the vegan game compared to other sports nutrition brands. 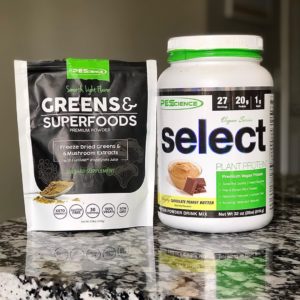 Beyond tasting delicious (especially that Cinnamon Delight flavor), Select Vegan Protein is a high quality blend of two excellent plant proteins: pea and brown rice protein concentrate. Since the majority of plant proteins lack a sufficient amount of one or more essential amino acids, it’s important to combine different plants that compliment each other. If you see a vegan protein with only one plant source listed on the label, then we suggest looking for another option for optimal results!

And unlike several other vegan protein powders, Select Vegan Protein is soy-free, gluten-free, and naturally flavored and sweetened! If that’s not good enough, PEScience has third party test results online to verify what’s on the label is actually in the bottle for every batch! They have nothing to hide and want to make the customer feel confident in their purchase.

PEScience uses brown rice and pea protein concentrate to yield a total of 20g of protein per serving. But you may wonder what else they add to create an amazing Chocolate Peanut Butter flavor, along with a smooth and creamy texture.

Here’s a list of each added ingredient and a quick overview on what each one is used for:

PEScience has quite the history of putting out incredible-tasting protein powders. If you’re looking for vegan protein powder that actually tastes good and has a nice creamy, milkshake consistency then Select Vegan Protein is a must-try. As of writing this article, our top flavors are Chocolate Bliss and Cinnamon Delight! 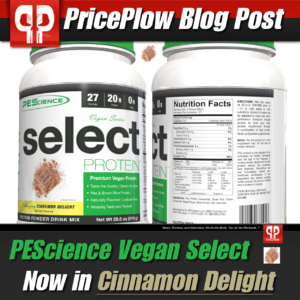 This Cinnamon Delight flavor is insane – but you better be a cinnamon lover x10!

Beside the amazing Chocolate Peanut Butter flavor, here’s an updated list of all other flavors Select Vegan Protein comes in:

Ever since PEScience launched Select Vegan Protein back in 2016, it quickly became a PricePlow favorite. Despite all of the other contenders that have come up over the years, Select Vegan Protein consistently makes it into PricePlow’s Top 5 Vegan Protein Powders each year! And with every new flavor release we’re reminded just why we enjoy this protein powder so much. 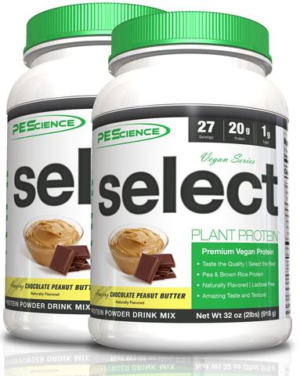 If you’re sick of drinking a plant based protein powder that’s gritty, doesn’t mix well, and has an earthy aftertaste, then pick up PEScience Select Vegan Protein. They’ve really set the standard for what a vegan protein is supposed to taste like. The days of choking down a plant-based protein shake are over!

Furthermore, you can enjoy Select Vegan Protein in a variety of different ways. Add it into your favorite recipes, make an epic smoothie bowl, use it to add flavor to your cereal, or throw some in your morning oats! The possibilities are endless and with the way Select Vegan Protein tastes, it’s great for satisfying cravings.

PEScience has been crushing the product launches lately, and it sounds like they have a lot more on the way. If you want to get notified when more flavors or products get released and when insane deals go live, subscribe down below because PricePlow has you covered!