Discontinuation Notice: This product has been marked as discontinued in 2022. We’re leaving this article live because the formula is unique and there’s some good information to learn inside.

PEScience quietly released a “nutrient partitioner” for high-carb bulkers named Mass-NP. If you like heavy amounts of carbs, you’re going to *love* this supplement. Below is a thorough analysis of the supplement as well as the mechanisms it affects.

A quick look at carbohydrates, insulin, and energy stores

Good thing we have a tool to regulate blood glucose to avoid it getting too high! This tool is an extremely powerful hormone named insulin. 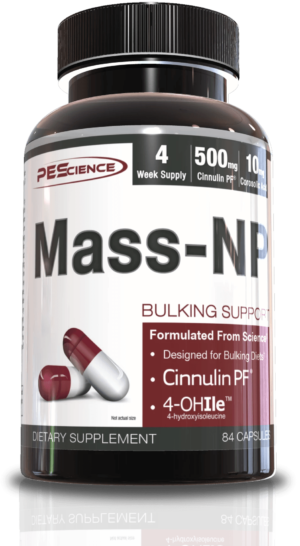 A limited-edition release for Winter 2019, PEScience Mass-NP is the bulker’s nutrient partitioner!

You can think of insulin as a green light when you’re stopped in traffic. You (glucose) pull up, wait a little bit for the green light (insulin), and then you may go on your way (into a cell). If there is no green light, you cannot proceed (into the cell), and this is a big problem since high blood sugar levels for prolonged amounts of time are dangerous. You need to make sure that you are able to store the sugar in cells rather than it rising to uncontrollable levels in your blood.

Insulin is released when the beta cells in your pancreas (which makes insulin) detect a rise in blood glucose levels. The insulin secreted then signals for the glucose to get stored into various cells (liver, fat, and muscle — the latter of which we’re going for when bodybuilding), and out of your bloodstream to bring the blood glucose level down to a healthy and safe range.

In order for your body to be able to store glucose into cells – you need insulin. But it isn’t enough to have insulin – your body, especially your muscle cells, have to be sensitive to insulin or it will not accept the glucose that insulin is trying to store inside.

Insulin sensitivity: the secret to success

If you have low insulin sensitivity, not only will you likely have chronically elevated blood sugar levels (at least after carbohydrate consumption), but you are actually not utilizing the carbohydrates you are eating very efficiently at all! This is a major contributing factor to developing heart disease and multiple other serious diseases. 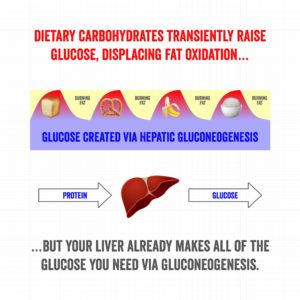 Every time you eat carbohydrates, you stop burning fat! But as bulkers, we want that carbohydrate-based insulin spike.. just not forever. With the help of supplements, we can shuttle that sugar into muscles and get back to leaning out. Image courtesy @TedNaiman

Insulin sensitivity is important for general health, but it’s also important for muscle gains. When you consume a high carbohydrate diet, you do not want the carbohydrates you’re consuming to turn into body fat or to stop you from burning fat for too long. It’s preferential for them to be stored inside muscle cells as muscle glycogen, which not only adds a wicked cosmetic look (fullness) but also aids in performance, because during weight training you are burning ATP and Glycogen… not body fat.

To add to this, there’s the simple fact that the vast majority of those partaking in weight training wish to reduce their body-fat percentage and increase their muscle mass. Having high insulin sensitivity is conducive to this goal, and having low insulin sensitivity (ie being insulin resistant) is very unfavorable. When you have high insulin sensitivity in the muscle, you will absorb the carbs into the muscle like a sponge, rather than it being stored in fat cells, or even worse than that – just floating aimlessly in the bloodstream (hyperglycemia).

How to sensitize our muscular systems to insulin

We can sensitize the skeletal muscle to insulin through a couple different ways, the most major way being exercise – such as weight training[1-3] or any other exercise (the more intense the better) – which you most likely already partake in seeing as you’re reading an article about a sports supplement for bulkers. Since you probably already weight lift, it’s redundant to discuss that here… so the angle we will instead take is increasing skeletal muscle insulin sensitivity through supplementation.

Glucose disposal agents were in infancy 10 years ago, where only a few ingredients were marketed to improve insulin sensitivity and marketed as GDA’s. Over the past decade or so though, they have gained rapid popularity – as the interesting and nearly-mainstream supplement niche joined the ranks of other supplements such as protein powders and pre-workouts. 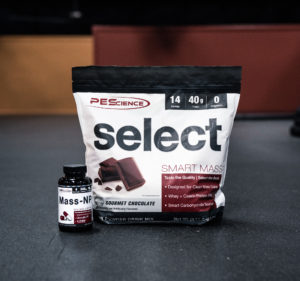 Supplementing with glucose disposal agents will help sensitize your skeletal muscle to insulin which could be very important for those resistant to insulin, or those who are consuming a large amount of carbs on a given day (cheat meal anyone?) and especially if you’re eating high carbs for longer periods of time because you’re constantly ‘asking’ your body to pump more insulin to deal with the high levels of blood glucose from that high carbohydrate diet.

The more carbs you eat, the more insulin you have to make – and the more your cells (again, preferably muscle cells) have to be willing to accept. The solution is to either eat fewer carbohydrates, OR to sensitize your skeletal muscle cells to insulin so that the insulin you do produce works extremely effectively. If you are highly sensitive to insulin, and your muscles accept the glucose with open arms, it means your beta cells can make less insulin so they do not have to work as hard to drive down your blood glucose level as it rises after each and every carb containing meal you eat.

If you are eating a high carbohydrate diet (e.g performance athlete, bodybuilder etc) it is quite possible that using a GDA supplement such as Mass-NP by PEScience would be of benefit to you by assisting in keeping your insulin sensitivity high! Mass-NP, by PEScience is a great formula of 4 ingredients that will assist in just that!

Now that the foundation is firmly planted, let’s check out PricePlow’s coupon-driven prices, let you sign up for our PEScience alerts for future deals and product launches, and get into Mass-NP specifically!

Let’s get started on the analysis of this formula!

Each serving is from a complete day’s dosing of 3 capsules, but the instructions state to take only one capsule at a time with three meals a day.

PEScience displays an entire day’s “serving” on the label, but that comes in three capsules – and each capsule should be taken separately with a meal (definitely a carbohydrate-containing one).

It’s generally recommended to take such supplements “with first bite” but it may not be a bad idea to take it up to 15 minutes before eating.

Mass-NP: A GDA with a Potential Anabolic Twist

All in all, this looks like a fantastic product – with all four ingredients having copious research backing up their effectiveness at assisting in their own way at glucose disposal. This is a unique, limited-edition formula that parallels the ingredients in LipoVate – so if you’re looking for ingredients like berberine, check that one out as well. Mass-NP is also a great follow-up for the incredible PEScience Select Smart Mass, our current favorite weight gainer. 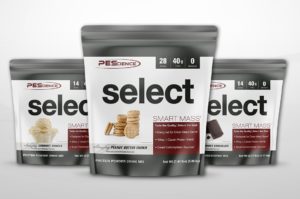 No doubt, we’re huge fans of GDAs for both dieters and bulkers. Almost regardless of carbohydrate consumption, they’re beneficial. But alongside the ultra high carb intakes of bulkers, we pretty much consider them absolutely necessary at this point, at least for all but the most insulin-sensitive athletes.

The bonus question mark is hesperidin. We’ve seen it in a few formulas for various reasons – potential estrogen inhibition, possible anabolic support, and an appetite boost. We’re confident in its abilities to assist with glycemia, but we’re hopeful that we can get something more out of it. If so, this is actually the kind of supplement PEScience was founded on (shout-out to the old-timers from the original Anabeta days).

Since it’s a limited edition release, if you’re interested in testing this unique combination for bulking season, get in on Mass-NP before it’s too late!