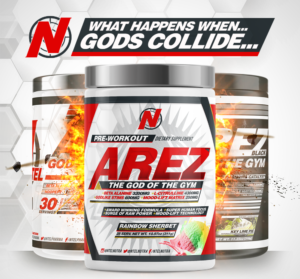 NTel Pharma is known for having two of the hardest hitting, energy throttling pre workouts in the market designed to make you God of the Gym. We’ve covered their previous powerful pre workouts extensively on the blog, but the new year brings about much speculation as to the fate of one of the most popular, hardcore stimulants out there in DMHA.

With that in mind, NTel hit the drawing board in 2017 to develop a more powerful version of its headlining pre workout, one void of any questionable stims, yet still ringing true to its reputation of one of the premier pre workouts on the market.

The new AREZ formulated in 2018 is the culmination of months of painstaking R&D to create a formula that’s sure to send any stim junky into the stratosphere. This is the collision of two worlds – the light and the dark – and what we’re left with is a product one can only call cataclysmic, for workouts that will leave you on a sacred level of enlightenment.

Before we get to the mega-breakdown, make sure to sign up for PricePlow alerts and check the best deal on this new energy-laden pre workout:

We’ve seen the full panel for 2018’s AREZ, and it is indeed a glorious exercise is power, pumps, and energy. Mega-AREZ is the perfect fusion of AREZ White and AREZ Black to yield a pre workout that brings it all.

”Last year when we released AreZ White, we formulated it based on what we FEEL and what we realized certain ingredients did synergistically. Doing this, while sounding VERY practical, is not something many companies do. Many companies go with whatever ingredients have generated a buzz on their own, throw them together, and say here you go.

With this being the biggest we’ve ever been, and still in keeping of the same traditions, we started formulating this MEGA-AREZ as soon as Arez White dropped. While the current stim formula is very good, we wanted to exhaust every avenue and every possible ingredient combination… We feel that we did exactly this, and much to our own surprise: We found a stimulant formula that is BETTER in every way. And instead of riding the wave of currently popular ingredients which would probably lead to more sales… We chose to be innovators and bring our customers what we feel is REALLY the VERY BEST formula.

We took ALL of the best reviews of AreZ White and Black, and set out with a goal.. Keep every GOOD thing about BOTH of them, and do away with anything that caused a user to not like it.

It was a big undertaking to try and resolve what FEW flaws customers saw in our previous versions….

But we did EXACTLY that.

The Happiness, RAW POWER, and Energy surge of Arez White is ALL HERE. We utilized some exotic and rare stimulants to recreate this feeling, and add even MORE power to what was the strongest stim cocktail on the market. The Pump? It’s now larger than the ENTIRE AREZ WHITE SCOOP.

We covered so many bases, making this the perfect All-In-One Pre-Workout for STIM Freaks that it’s hard to choose one section of the 1,000MG+ Stim formula to share with you guys, but I have to touch on the Mind x Muscle Fusion Matrix.. As you can see from the Blurred Panel, We let you guys in on a few of our exotic Stims.”

Well… damn. This looks like our first must-try supplement of 2018!

From the initial images we’ve received, we can confirm that Mega-AREZ will launch with four flavors:

DMHA may be on its way out, but AREZ is here to stay, DMHA be damned. Mega-AREZ represents the next evolution in high energy, hard-hitting, comprehensive pre workouts that look to deliver everything fans want, and then some.