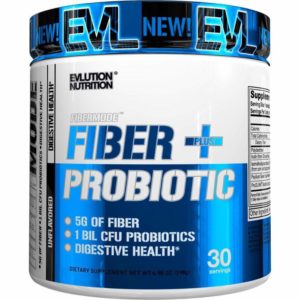 EVLution Nutrition is a brand we’ve shown a lot of love, especially with our constant obsession over the Fruit Punch flavor of BCAA Energy. With all the hype and craze surrounding pre- and intra workout supplements, there is less attention given to one’s overall health than there should be.

One of these often overlooked aspects includes our digestive health, and EVL’s Fibermode Fiber + Probiotic is here to remedy that problem and add a bit of fiber to a potentially otherwise-low-fiber diet.

With a combination of fibers and probiotics, Fiber + Probiotic is made to support digestion and replenish the healthy bacteria in your gut. And we like this one because it has a very interesting fiber known as polydextrose that not enough people have tried or looked into.

Before we get into this rather unique supplement, make sure to check out PricePlow’s coupons and deals, and don’t forget to sign up for alerts because we do a monthly giveaway with EVLSports and you’ll want to get notified!

Fiber + Probiotics has a simple, transparent formula of five ingredients, all put together with the sole purpose of making everything that you consume be used as efficiently and effectively as possible.

The initial powder release is unflavored, and we’re unsure if they’ll add any flavored versions, but you can sign up for PricePlow’s alerts above or below on this page to get notified if they do!

The list below will remain up to date in case any flavored versions ever come out: 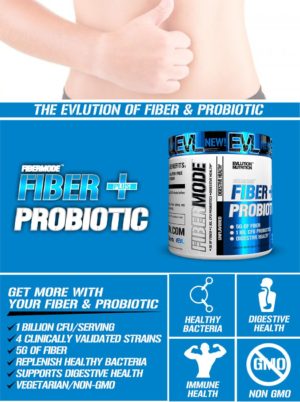 Gut problems? Take our three steps to the side and try out a quality fiber and probiotic!

Per the bottle’s instructions: “As a dietary supplement, mix 1 scoop with 8-10 oz of water and take with a meal.” Seek a medical professional before starting any new supplementation program, especially if you have a severe medical issue such as IBS or unrelenting constipation.

But remember, many supplement users are merely adding lipstick to a pig. If you really care about your gut health, do the following for starters:

A month of doing these three things alone will do more for your gut than any probiotic ever will… but in conjunction, the benefits should be even greater! 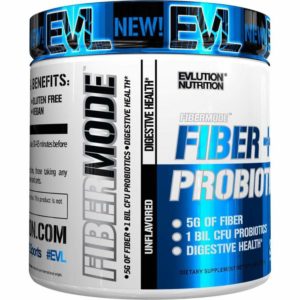 EVL has a reputation for some solid products, and this one seems to be no different. We love seeing unique, niche products to help out people with specific areas of their health and nutrition, like this one.

Just like they did with their Stacked Plant Protein, EVL’s not afraid to step away from the world of the male-centric “sports nutrition” to take their talents and provide greater benefits to the overall health industry.

If you need some extra fiber in your life (and most carb-based dieters do), EVLution Nutrition has done a great job assembling a list of ingredients to help you out with digestion and overall gut health. Anyone with mild constipation or gut problems should look at some of the dietary restrictions above and give EVL Nutrition’s Fiber + Probiotic a shot.