January 2020 Update: After reviewing BioNeutra’s petition against this June 2018 decision, FDA has submitted their FINAL ANSWER on January 9, 2020: IMO IS NOT A FIBER.

You can skip down to the 2020 Final Answer Update at the bottom of this post, or keep reading to see the original 2019 decision first 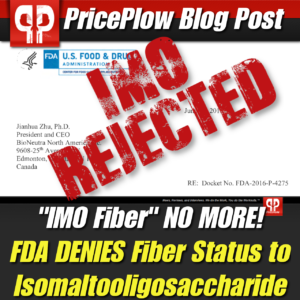 It’s not a fiber – the FDA has issued a guidance, and this time they’re right.

The FDA has recently published the long-awaited ruling on dietary fiber titled: “The Declaration of Certain Isolated or Synthetic Non-Digestible Carbohydrates as Dietary Fiber on Nutrition and Supplement Facts Labels: Guidance for Industry.” The declaration greenlit eight new isolated or synthetic non-digestible carbohydrates, giving them the right to be claimed as dietary fiber on food labels and nutrition/supplement facts panels.

Absent from the list was the commonly used isomalto-oligosaccharides, often referred to simply as “IMO Fiber”. IMO burst onto the scene as the “fiber” source in the original Quest Bars (later bested by ONE Bar) and debate has swirled around its true macronutrient identity ever since. A detailed background on IMO as well as the debate it has created, including lawsuits, can be found in our first examination of the ingredient, where we called it a “Fraudulent Fiber”. Turns out we were absolutely correct.

“Make friends with change, it’s the only thing you can count on.” 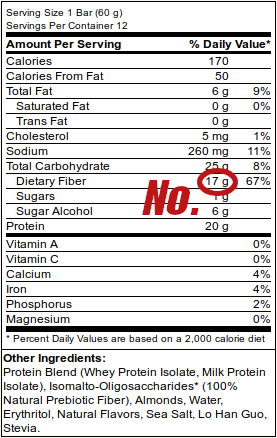 This decision caps up a good half-decade of label scamming.

Modern day technology has ushered in an era of change that is unprecedented in human history. The manner in which we educate our children, consume news, travel, listen to music, and spend our leisure time have all seen a makeover the likes of which would make a time traveler from as little as 100 years ago speechless. The food technology and ingredients industry are no exception. Thousands of food additives and ingredients are used today that were unheard of as little as 50 years ago. For better or for worse this is progress.

When rapid progress collides with the molasses-paced bureaucracy of large government agencies there is always a game of catch-up being played. The FDA is tasked with a monumental responsibility and these things simply take time, but the new fiber declaration was the “catch up” we had all been waiting for. When it comes to food items that are connected to health claims as serious as fiber’s, due diligence on the FDA’s part is something that should be supported. As consumers, we benefit when the FDA gets it right the first time, even if that time took, well, a great amount of time.

If you’d rather listen and watch than read, then watch Mike Roberto, PricePlow’s founder, CEO, and resident biomedical scientist discuss the findings:

According to the FDA:

“The final rule, among other things, defines dietary fiber as non-digestible soluble and insoluble carbohydrates (with 3 or more monomeric units), and lignin that are intrinsic and intact in plants; isolated or synthetic non-digestible carbohydrates (with 3 or more monomeric units) determined by FDA to have physiological effects that are beneficial to human health (21 CFR 101.9(c)(6)(i)).”[1]

In order to claim a product as fiber, the above needs to be satisfied and a civilian petition (21 CFR 10.30.) must be submitted to the FDA. Various companies with currently-marketed “fiber” products participated in the petition process and the following were approved:

Not a Fiber! IMO Did Not Make the Cut!

BioNeutra is a Canadian manufacturer and supplier of various ingredients / products. Most well-known of their line is Vita-Fiber…. which isn’t a Fiber. Time for a name change, or time for them to file a new petition?

Isomaltooligosaccharide (IMO) manufacturer, BioNeutra North America Inc., was denied fiber approval for their VitaFiber product after submitting their civilian petition. The FDA announced the availability of a draft guidance document titled “Scientific Evaluation of the Evidence on the Beneficial Physiological Effects of isolated or Synthetic Non-digestible Carbohydrates Submitted as a Citizen Petition (21 CFR 10.30).” The draft guidance basically laid out the rules for getting a fiber approved and all that was required.

In a letter from the FDA to Jianhua Zhu, Ph.D. President and CEO BioNeutra North America Inc., the FDA stated:[2]

“The petition identified ten human intervention studies, but excluded six of them from consideration for at least one of the following reasons:

Right off the bat 6 of the 10 studies submitted by BioNeutra are thrown out and will not be considered for the above-stated reasons. Not a good start. Regarding the remaining four the FDA stated:

“Of the four remaining clinical studies that were identified and discussed in the petition (see Petition at page 9), we determined that scientific conclusions could not be drawn from two because the study subjects used enemas and/or laxatives.

Finally, in addition to evaluating the two remaining clinical studies identified and discussed in the petition, we identified and evaluated two studies that you did not include in your petition. We determined that scientific conclusions could not be drawn from one study because of a lack of a control group and of statistical analysis.”[2]

So the FDA even dug up a couple studies not submitted by BioNeutra for a total of three studies that would be examined to determine IMO’s merits as a nutritional fiber candidate. The FDA goes into great detail in their IMO denial letter to BioNeutra.[2] The following statement by the FDA pretty much sums it up:

With so much riding on FDA approval for IMO, the handling of the petition process certainly could have gone better for BioNeutra. If what they submitted for IMO was the best they have then perhaps many of the allegations lobbed at IMO have been right the whole time. BioNeutra is free to submit a new petition with additional scientific evidence supporting their product so the door has not been closed entirely on IMO, but for now, fiber status will remain DENIED.

So what is Isomaltooligosaccharide? 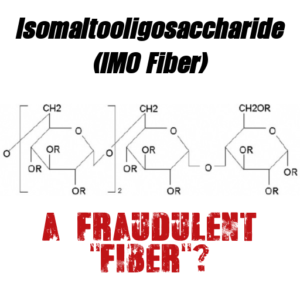 Isomaltooligosaccharides have been widely used in protein bars for a number of years for their high fiber, lower calorie claims, but they shouldn’t be considered “dietary fiber” as the labels say. Enter prebiotic fiber!!

As mentioned in our original article criticizing IMO and calling it a “fraudulent fiber”, we effectively concluded that it’s nothing more than a slightly sweet, slightly lower-calorie carbohydrate that has about 3.3 calories per gram (as opposed to 4 calories per gram). This could still have some practical use, but the long story short is that it’s still a blood sugar spiking carbohydrate, and several businesses made serious coin selling it as something more for several years.

The fate of IMO is far from sealed, but at this point, protein bar manufacturers have moved on — or at least, they’ve stopped labeling it as “fiber”. New evidence may be obtained, perhaps focusing on a health benefit other than increasing bowel movement frequency, and thus garnering FDA approved fiber status. IMO may still be used in food and supplement products but no longer can be listed as fiber.

As discussed in our post regarding the FDA’s guidance over concentrated caffeine, remember that guidances are not laws! But this shows their “current thinking”, and it seems that they’ve made quite a clear line in the sand that should not be pushed on a label until further litigation has gone down. 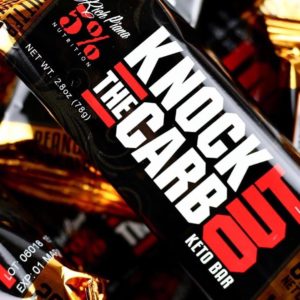 Relying on prebiotic fiber, here’s one (5% Nutrition’s Knock the Carb Out) that didn’t spike Mike’s blood sugar much!

Meanwhile, we’re seeing a lot more protein bars using prebiotic fiber and even a few with polydextrose, both of which can be labeled as fiber. And on the other side of the coin, sugar alcohols such as glycerin are hotter than ever.

Fiber is very important to many consumers, and perhaps it’s time we disallow any unapproved fibers from being listed as “fiber” without making its way through a major approval process.

With such a large financial interest at stake for BioNeutra, IMO’s story will continue to be written and we at PricePlow will keep you updated on new developments. The good news for consumers is that there are some legit fibers available today to fit various needs, but IMO, while an interesting carbohydrate source, simply isn’t a fiber.

On May 3, 2019, BioNeutra issued a petition to the above news, requesting that FDA amend the above document to include isomaltooligosaccharide as a fiber. The FDA weighed the arguments, and came to their final answer:[3]

Denied: IMO is not a fiber!

Much of the answer reiterates the same position as the 2018 denial, refuting the research submitted by BioNeutra. The most major factor is that IMO does not increase laxation, which is what most expect from a dietary fiber.

“Based on our consideration of the scientific evidence and other information submitted with the petition, and other pertinent scientific evidence and information, we conclude that the strength of the evidence does not show that the consumption of IMO has a physiological effect that is beneficial to human health. Consequently, we do not plan to propose to amend the list of nondigestible carbohydrates that meet the definition of dietary fiber to include IMO as a dietary ber based on this scientific evidence. Therefore, in accordance with 21 CFR 10.30(e)(3), we are denying your petition.”[3]

— Claudine Kavanaugh, Director of the FDA Office of Nutrition and Food Labeling

They do, however, leave the door open for more evidence, since “new scientific information may become available that demonstrates a beneficial physiological effect associated with the consumption of IMO”. But at this time, they do not see it that way.

You can watch me discuss this a bit more below, where we also talk about the glycemic impact study shown afterward:

A 2018 study on glycemia backs up the decision

Just before the above decision was made, a study was published looking at the glycemic impact of IMO (specifically BIOLIGO️ IL5040 isomaltooligosaccharide).[4] It behaved very similarly to dextrose:

BIOLIGO️ IL5040 IMO behaved quite similarly to dextrose. This may be different than VitaFiber, but it does not bode well for the IMO category overall. “Post-prandial glycemic response in healthy adults (a) venous glucose (b) venous insulin concentration”[4]

Additionally, we imagine this is bad news for ONE Brands (now owned by Herschey), who had a class action lawsuit filed against them regarding the labeling of their ONE Bar.[5]

For the purposes that IMO is sold into, the above chart spells very bad news, and is a good reason why low-carb dieters, diabetics, and insulin resistant individuals should completely ignore “net carbs” and test their blood sugar frequently.