Ping, Li, and Fleming: The First Three Studies Where DMAA Was Found in Geranium

This is part one of a six page series researching whether DMAA (1,3 dimethylamylamine) is a natural constituent of geranium flowers. All six parts are linked from our main DMAA in Nature / Geranium page.

Note from Mike, Founder of PricePlow
Thanks for joining us. A tremendous amount of research went into these articles, and since there is so much written (over 13,000 words), it will be best absorbed in chunks. Take it one part at a time and enjoy. 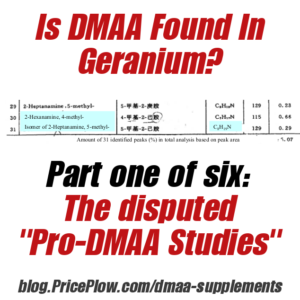 We’ll start with the disputed studies, and why the government wanted more “research”.

We’ll briefly begin this research series with the three studies where DMAA was found and published as detected.

Many industry scientists, including the FDA’s, have questioned these three papers, but we aren’t going to dwell on them too much because the objections are indeed reasonable.

Instead, it’s the research discussed in our subsequent parts where things start to get wildly interesting — and that’s where we’ll spent more time. But first, let’s get warmed up and understand how it all began:

At the time in 2012, the above three studies were the three most major pieces of evidence for the pro-DMAA side. As they are not slam dunks in the FDA’s eyes due to the objections above, and did not “override” the studies where DMAA was published as “not detected”, the FDA then sent their infamous warning letters,[8] which effectively got most of the DMAA supplements removed from the market.

But now is when things start to get really weird…

Up next: The three studies where DMAA wasn’t found…. or WAS it?

The next three parts of this series (parts 2, 3, and 4) will make you question every research paper you’ve ever read.

You can also see the list of DMAA Supplements still on the market and stay tuned to Hi-Tech Pharma’s DMAA Lawsuit and Appeal Against the FDA.

The following is a list of references from all sources cited in this entire series of articles: