The Unconfirmed DMAA Geranium Findings.. Including One at Home Depot!

This is part six of a six page series researching whether DMAA (1,3 dimethylamylamine) is a natural constituent of geranium flowers. All six parts are linked from our main DMAA in Nature / Geranium page. 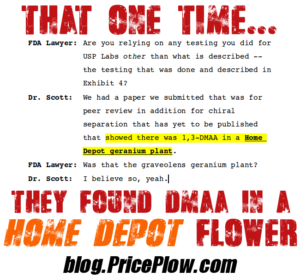 It doesn’t get any better than this. We save the best for last!

Throughout the course of this six-part series, we’ve put readers through the ringer here, from conspiracy and collusion to complete scandal to cover-up to tax waste. Time and time again, DMAA has been found in geranium plants and oils, but higher powers have spent millions trying to cover up the truth and bludgeon USPLabs and Hi-Tech Pharmaceuticals in the process.

With all of the serious stuff covered, today we’ll lighten the mood with the unconfirmed geranium DMAA findings. Some of them are better than others, and one is downright funny (DMAA detected in a Home Depot geranium?! You’re damned right!)

Below are the final three DMAA findings in geraniums. They’re not confirmed, so take them with a grain of salt, but we’re confident in the sources. Also note that there’s a final, 11th finding, but it’s based upon hearsay, so we aren’t reporting it. But we’re quite confident it was found there as well.

This concludes our evidence regarding DMAA in geranium flowers, minus the 11th hearsay source that is buried in one of the sources below.

Our conclusion is on our main geranium page, but we’ll repeat it here:

After all’s been said and done

Despite the mislabeling of the earlier versions of Jack3d – a separate crime that shouldn’t (and won’t) go ignored – USPLabs was right all along, and they’ve known nearly all of the data presented above for five years![30] To call this a “railroading” wouldn’t even cover a tenth of what was done to them here.

We may not understand how or why it happens, but whether you like it or not, the overwhelming amount of data presented in the article above prove beyond a shadow of a doubt that 1,3 Dimethylamylamine is a natural constituent of geranium flowers, even if in very small quantities.

And this is what makes DMAA a DSHEA-compliant ingredient — haters, liars, fraudulent researchers, and corrupt government officials be damned.

The following is a list of references from all sources cited in this entire series of articles: