This effectively ends the Hi-Tech DMAA Lawsuit, unless they were to somehow take this to the Supreme Court, which seems unlikely given the current political climate.

On August 30, 2019, three judges in a panel from the 11th Circuit’s Court of Appeals upheld the District Court’s decision that despite having been found in nature several times, DMAA is not a Dietary Supplement per the Dietary Supplement Health and Education Act of 1994 (DSHEA). 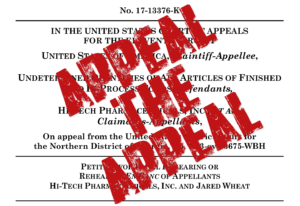 Hi-Tech Pharmaceuticals has filed an en banc appeal, claiming that the two majority judges not only got it wrong, but will affect other parts of the industry.

In that decision, two of the judges (Hon. Gerald Bard Tjoflat and Hon. Robert Lewis Hinkle, who are the majority) sided with the FDA and affirmed the District Court’s previous decision against DMAA, while one judge (The Honorable Adalberto Jordan, the dissenting) sided with the arguments presented by Hi-Tech Pharmaceuticals. In his dissent, Judge Jordan stated that a new district court case should be held to determine once and for all if DMAA could be found in geraniums.

Noteworthy is that Judge Hinkle is not a permanent member of the 11th Circuit Court of Appeals, but there on temporary assignment.

Because of the dissent (discussed in more detail below), and the way this decision could affect several other situations of importance, Hi-Tech Pharmaceuticals has filed for an en banc review and is requesting a rehearing or a reversal of judgment. In an en banc review, the case would be heard before all appellate judges, but this would only happen if a majority of the active judges decide to hear it after reviewing the request. That request is below:

How do you define the words “constituent” and “botanical”? DMAA’s life depends on them.

The appeal ultimately came down to the definition of the words “constituent” and “botanical’, two words that weren’t clearly defined by Congress when they wrote the law in 1994. 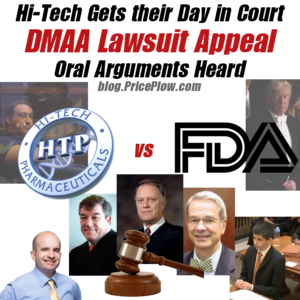 Hi-Tech got their day in court, and behind lawyer John Neiman and some fiery judges, Jared Wheat’s team made the best of it.

In siding with the FDA, Tjoflat and Hinkle argued that DSHEA’s terms for ingredients—“concentrate[s],” “extract[s],” “combination[s],” and “metabolite[s]” — should be interpreted as “usable form or amount” and cannot include a “substance that is present in a plant in only trace amounts”.

Judge Jordan’s dissent from those statements was more simple: “the statutory text does not provide a basis for… the majority’s holding.” In addition, there are plenty of definitions

Dictionaries cited included Merriam-Webster, Oxford, American Heritage, and Webster’s. As childish as that may seem, this seems to be the best that the judges can do, given the sharp corner case we’ve found ourselves in and the vagueness of 1994 DSHEA. We can’t go back and ask those Congressmen what they meant, after all, so it’s up to the courts to interpret those laws. Yet they cannot rewrite those laws. Hi-Tech’s legal team argues that this is ultimately what is happening through the majority’s “interpretation”.

John C. Neiman, Hi-Tech’s attorney who wrote this (and also argued this position in front of the panel of judges), puts his concerns quite clearly with the majority:

The critical question instead is whether DMAA is a constituent of a geranium—and it is hard to describe the majority’s opinion as doing anything besides writing words into the statute on this front.

Why grant an en banc review? 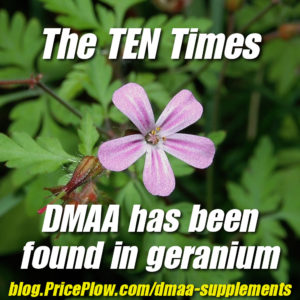 Hi-Tech should be able to prove how much DMAA they can truly pull out of geranium, because there is strong evidence for DMAA being in geranium robertianum. The FDA obviously doesn’t want to go down this road again though.

On top of Hi-Tech’s arguments that the majority is simply wrong in its definition, they point out that DMAA is not the only compound which is found in trace amounts, and this could have greater industry and health ramifications if the court allows for such a tight interpretation of DSHEA 1994. They argue that resveratrol and pterostilbene are two other ingredients which could suffer a similar fate, and many rely on these supplements for cellular health and longevity.

This makes it a “matter of exceptional importance” that warrants the en banc review. If the review is granted, a date will likely be set for further hearings.

Long story short, Hi-Tech is appealing the decision of the appeal. Truly the last stand before the Supreme Court, who possibly wouldn’t take the case.

Stay tuned to PricePlow and our Hi-Tech Pharmaceutical news alerts for more updates as they come:

Until then, just remember our key document, which details the ten (actually eleven) times DMAA was found in geranium.

Older news from the appeal ruling

DMAA is not an “herb or other botanical.” It is not a “constituent” of an herb or other botanical. And it is not generally recognized by qualified experts, as adequately shown through scientific procedures, to be safe under the conditions of its intended use. The district court properly so ruled. The decision is AFFIRMED.

This page will be updated and news will be released shortly.

The official “conclusion” is on page 22 in the PDF linked above.

No we are going to see an en banc rehearing as we believe Judge Jordan dissent was the correct interpretation. Judge Hinkle will not be part of an en banc ruling as he was sitting by designation due to the 11th circuit being short judges. There are 12 active judges and we will start 1 versus 1. Tjolflat is also retiring and may not be in the en banc decision as he is going to be 90 in December. 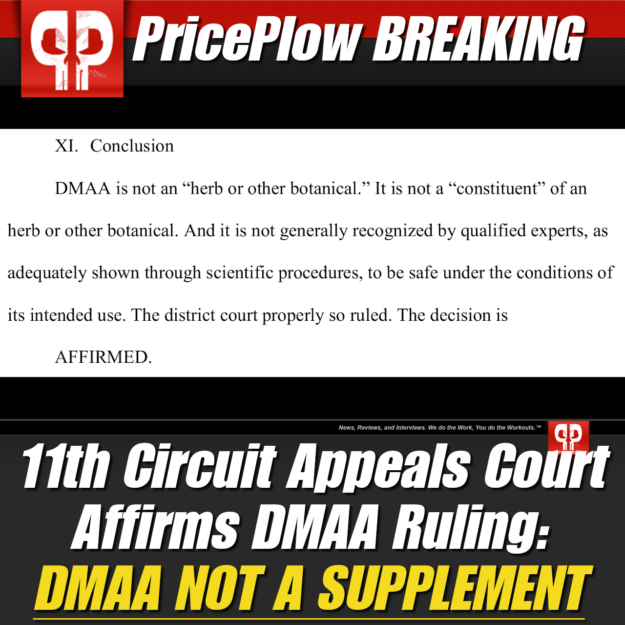 Unless taken to the Supreme Court, it seems like this one is over. DMAA is not a supplement, and as stated in the past, we will respect this court’s decision.