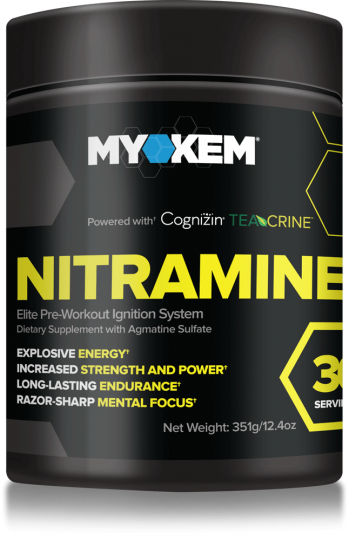 Myokem has unveiled the newest version of it’s popular pre workout Nitramine which removes picamilon in favor of L-Theanine and Theacrine.

One of the victims of the recent witch hunt against all things containing picamilon was the focus-centric pre workout, Nitramine. Myokem got the very short end of the stick there, having just reformulated Nitramine right before the FDA threw its picamilon-hammer down (in that version, they upped caffeine to 175mg and removed rauwolscine).

So fans of Myokem have been eagerly awaiting the release of yet another the new formulation.

With the release imminently approaching, the brand has finally revealed the updated product, in addition to completely opening up the label!

We’ll cover the new label below, but make sure to sign up for price drop alerts and check the best deal, but note that some stores may have the older formulas until early 2016, so check the labels or ask them to be sure:

Previous users of Nitramine will be glad to see that the majority of ingredients have been carried over to the new formula. The only two that are missing are picamilon, replaced by l-theanine, and L-Carnitine L-Tartrate (LCLT), which is replaced by Acetyl L-Carnitine (ALCAR), the more focus-based form of carnitine.

Users also now know how much of each ingredient they are getting as well, since Myokem has shifted to a fully open label: 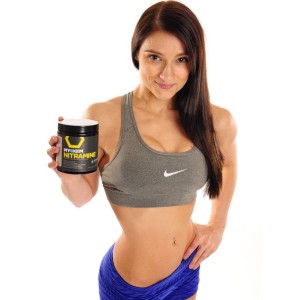 No news has been revealed in regards to specific flavors for the new version of Nitramine. Hopefully though, the brand carries over the two original flavors of Dragon Fruit and Havana Sunrise. As for new flavors, we’ll have to wait and see what Myokem has in the works.

Myokem’s reformulation of Nitramine looks like a sure-fire winner for fans of the OG version. There are far too many similarities between the two for fans to be disappointed, but the differences are basically all for the better in terms of smoother focus.

The addition of Theacrine should help provide an additional boost in energy that helps sustain the effects of caffeine, while ALCAR is the better focus agent than LCLT.

We can’t wait to see the response from the masses when it’s released, and hopefully we can get our hands on some to give you all a full breakdown of the new formula’s effects!