Merica Labz Hollow Point has arrived, featuring the patriotic brand’s take on turkesterone. Inside, you get 1000 milligrams of A. Turkestanica (10% turkesterone) coupled with epicatechin! 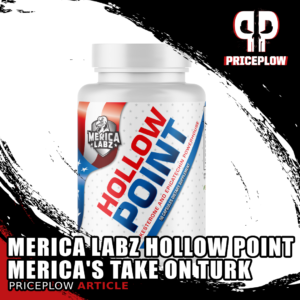 Merica Labz — the brand that goes by the tagline Never Big Enough — wants your muscles to have muscles of their own. That’s why they’ve released a second muscle building supplement to put alongside Full Metal Jacket.

What do you name a supplement that can defend you by disrupting estrogen, promoting anabolic activity? You name it after defensive ammo:

Merica Labz Hollow Point is the next muscle builder to stack with Full Metal Jacket — along with the Super Sized weight gainer and creatine-based BOOM Pre-Workout if you’re really smart. It features a simple yet powerful formula, pairing estrogen-disrupting Ajuga Turkestanica (standardized for 10% turkesterone) alongside myostatin-limiting epicatechin.

In this article, we dig into the known science on the phytoecdysteroids in A. Turkestanica (which includes ecdysterone as well as turkesterone), then look at some recent research on epicatechin, the epic force found in dark chocolate. First, let’s check on availability through PricePlow, but note that the official launch is June 13, 2022:

In two capsules, Merica Labz loads you up with the following: 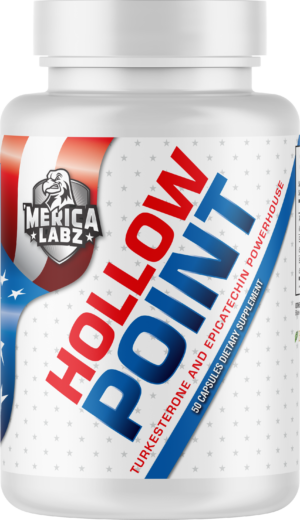 The Hollow Point label states to take two capsules daily with food. Due to the nitric oxide boosting capabilities of epicatechin, we suggest taking it pre-workout. On off-training days (if you have such a thing), take your two capsules with food around the same time of day.

Hollow Point is a play on the other Merica Labz muscle building supplement Full Metal Jacket. These two can be put together for quite the natty stack, helping to interfere with estrogen while providing the body some anabolic tools.

In any conversation about muscle-building, we also have to mention creatine and betaine, and you can get a solid dose of creatine in the latest version of Merica Labz Red, White, & Boom pre-workout supplement. In that case, you’d likely want to add 2.5 grams of betaine separately in the day. Alternatively, there’s 2.5 grams of betaine in Merica Labz Napalm Red, White, & Boom — and then you’d want to add 3-5 grams of creatine elsewhere in the day.

And of course, for more testosterone support, add in Liberty Ballz.

With these taken care of, it’s then up to you to chase the protein game. Merica Labz can help you there as well, with both Patriot’s Whey and the Super Sized weight gainer.

With these tools put together, it’s then up to you to go blow it up in the gym!