Posted on November 12, 2018 by Mike Roberto and CJ Luther | No Comments

Run by mastermind Rob Oliver, The Genius Brand has formulated several powerful supplements to nourish your body and mind. While we love sports nutrition formulas like what’s in the stim-free Genius Pre Workout and next-level Genius Muscle Builder, we may like their “mind over matter” supplements like Genius Joy and Genius Consciousness even more!

Crossing and Combining Categories with Mycology

Today, we cover a supplement that crosses both of those categories, as it’s marketed to “Nourish Your Mind, Body, and Spirit“. We’re talking about Genius Mushrooms, a blend of three of the most well-researched mycological (mushroom) species on the planet! 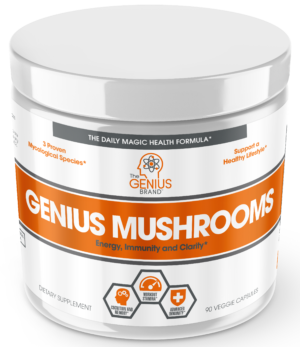 Marketed to provide energy, immunity, and clarity, Genius Mushrooms has three of the most well-researched mycological species around!

Genius Mushrooms is formulated to provide the following benefits:

In this article, we dive deep into the known research regarding these three mushroom species, citing over two dozen studies to prove that mushroom science isn’t as weak as some believe it to be.

Get ready to get your Genius cap on, but first, check out PricePlow’s price comparisons and sign up for Genius Brand news updates, since they’re always keeping us on our toes with new formulas:

In each 3 capsule serving of Genius Mushrooms, you’ll get the following: 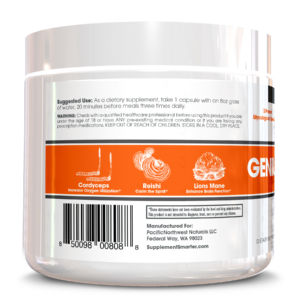 The suggested Genius Mushrooms Dosage is one capsule with water, 20 minutes prior to a meal, three times a day

This is a 100% Vegan, gluten-free supplement made in the USA.

Per the instructions, take one capsule with 8oz of water, 20 minutes before a meal, three times a day.

Stacking really depends on what your goals are, as this is a multi-faceted supplement that can be used for a multitude of reasons. As mentioned above, those looking for more cordyceps, especially for its athletic prowess, may enjoy adding in Genius Muscle Builder or another PeakO2 product to get some cordyceps militaris involved as well!

The Genius Brand takes on mushrooms with three research-backed ingredients!

Increased oxygen utilization, calmed spirit, and enhanced brain function are the three main benefits from cordyceps, reishi, and lion’s mane. They come together to form yet another Rob Oliver approved supplement.

If you’re new to the world of mycology (mushroom science), then this is a perfect place to get started – three well-researched ingredients from a highly-trusted brand. The rabbit hole goes much further from here, but this is a great starting (and stopping) point for many who are just looking for some stimulant-free energy and a great feeling of positive well-being.

The Genius Brand asks you to Supplement Smarter, and Genius Mushrooms could be the next step towards doing so. 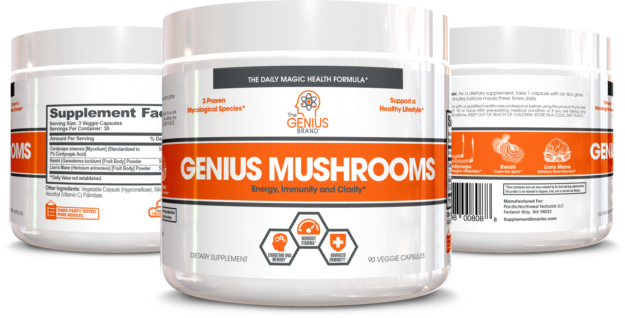